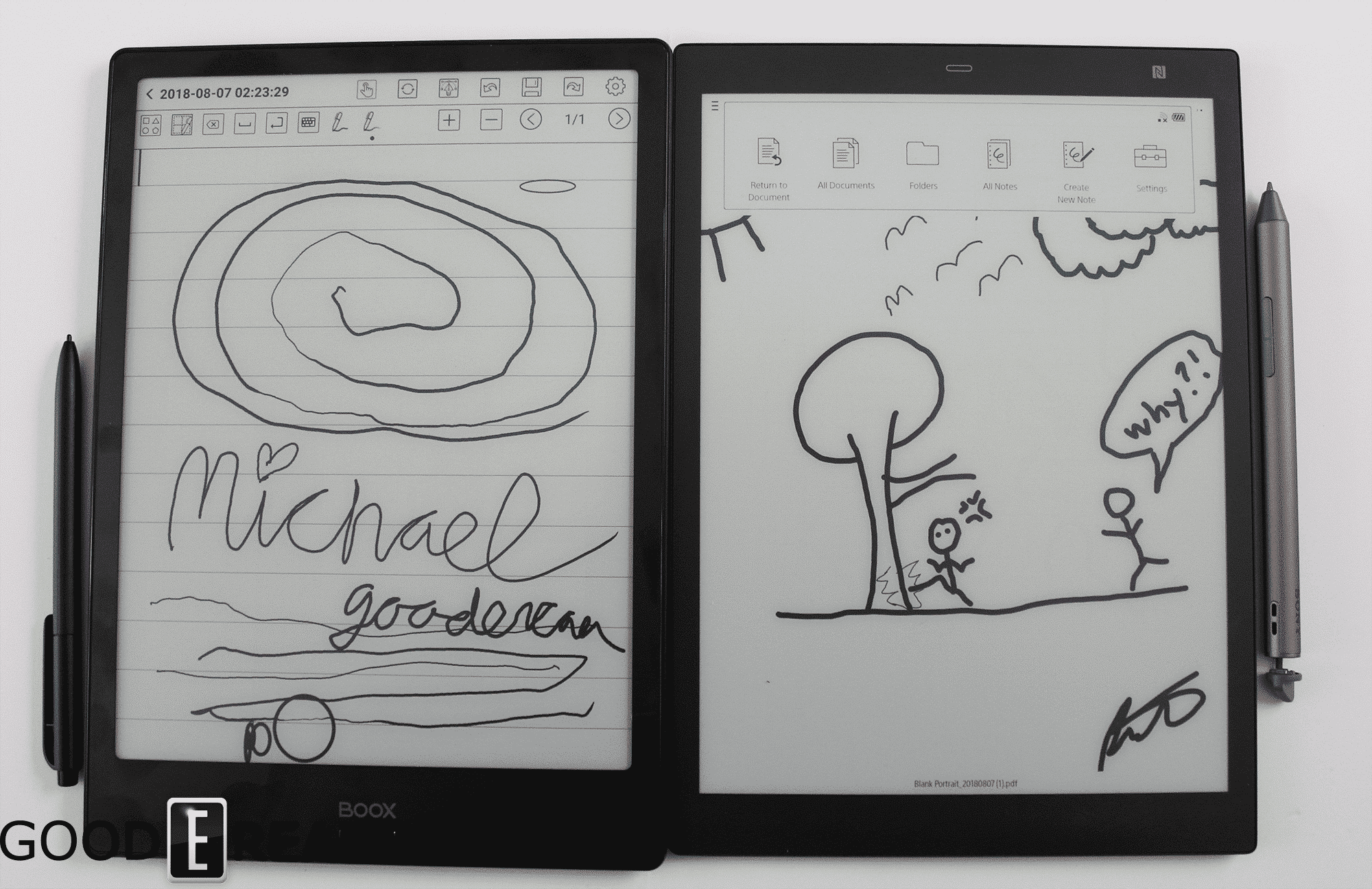 The Onyx Boox Note and Sony Digital Paper DPT-CP1 are two of the best 10.3 inch digital note taking devices on the market. Their key selling point is that they have an e-paper display and come with a stylus to edit PDF files and to freehand draw.

The DPT-Cp1 features an E-Ink Carta display with a resolution of 1872×1404 with 227 PPI. It has a capacitive layer for touchscreen interactions and also one for the stylus to take notes and write on PDF files.

The screen itself doesn’t have a back or front light, and has the slightly gray background of lower-cost Kindles. The PPI is not as sharp as the standard 300-ppi display on the latest ebook readers, and you can tell that when trying to read very small text or look at maps. The 16 levels of grayscale are standard for E Ink and are fine for graphs, charts, documents or maps.

The CP1 only reads PDF files and does a very good job at editing them. As soon as you load a PDF, you can immediately begin editing them with the stylus, whereas the Onyx needs to initiate stylus mode via a tabbed navigation option. Sony also does a great job in landscape mode, with split page view or having two different documents opened side by side. One of the drawbacks of the Sony is that it does not read ebooks or any other format. It does not have an internet browser and the stylus needs to be recharged after a few weeks of constant usage. It requires the use of the Sony Digital Paper app for for PC to transfer documents and an Android/IOS app to transfer PDFS from the Sony to your smartphone. You can think of the CP1 as a singular purpose device.

The Onyx Boox Note features a 10.3 e-reader with a flexible E-ink Carta display. It has a resolution of 1872×1404 and 227 PPI. The panel is comprised of Electromagnetic WACOM and a capacitive layer, which means you can use the accompanied stylus or use your fingers to interact with the screen or flip pages of an e-book. There is no stylus holder on the device, so make sure you do not lose it.

Overall the Note has a very slim profile and weighs less than 354G.  You can hold it with one hand without any troubles. There is a dedicated home button on the front of the Note and no others, whereas the MAX2 has two other buttons beside the home, which is used for turning the pages of ebooks or accessing other features.

Underneath the hood is a 1.6GHZ quad core processor, 2GB of RAM, dual speakers, mic, Bluetooth and USB C.  I have never seen an e-reader before with a quad core processor and this is a major selling point. The entire software experience is utterly amazing, apps instantly load and drawing has minimal latency. I was certainly not disappointed with any delays, which was surprising.

There is no 3.5mm headphone jack, so if you want to use headphones or a speaker it has to be wireless. I found the overall sound quality to be lacking. There is no EQ or other ways to turn up the mid or low ranges, something Bose and Beats excel at.  It is quite satisfactory for audiobooks or ebooks, but not for audiophiles. The stereo speakers on the back are an odd choice, since traditionally you have it laying on the back, as you use the device. This results in a muffled sound, you need to be using a stand up case or be physically holding it to get good sound quality. You can adjust the sound by clicking on the top center of the UI and adjusting it with a slider bar.

The Note is powered by a giant 4100 mAH battery and ships with Android 6.0 and ships with Google Play. Onyx has somehow optimized the Kindle app in a day 1 firmware update that eliminates page turn animations, making the stock Kindle for Android app better than the default eBook reader that is bundled on it.

The Onyx is more multifunctional than the Sony. You can do way more than just view and edit PDF documents. You can install apps, play games, read ebooks or listen to music.