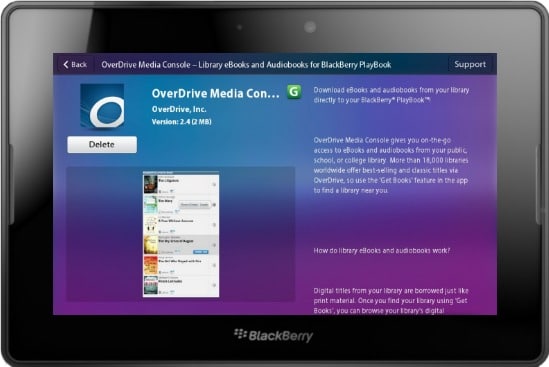 It has been a super busy last few weeks here at Good e-Reader with the official launch of the OS2 update for the Blackberry Playbook. We have been fervently filming many video reviews and tutorials on how to load in your own Android Games and Apps. We have even done a series on how to setup your own VPN to get Blackberry Music, Videos, Youtube, Twitter, and much more! Not only have we been filming, but we added almost 200 apps to our Good e-Reader App Store so you can find the very best Android converted files that run very well on the Playbook. Overdrive has helped us out in our efforts of getting more e-reading functionality on the Playbook with their new Overdrive Media Console on Blackberry App World.

The Overdrive Media Console is a free download and is fully compliant with the new OS2 operating system. It allows you to access your library’s digital selection of ebooks and audiobooks. It is fairly intuitive to use once you have your library card and 4 digital pin number. Overdrive is all over Canada and the USA, so many libraries support this digital push in the lending of content.