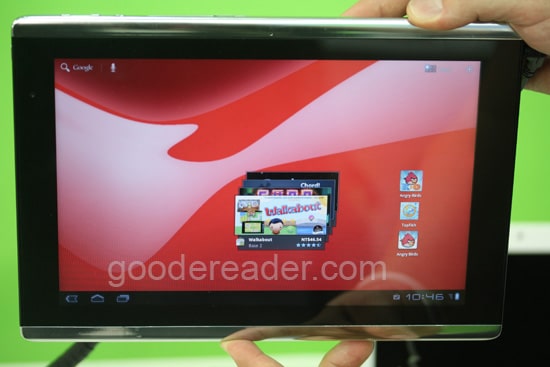 Packard Bell once known the world over for having entry level PC’s in thee early 1990’s got a bit of an upgrade today at Computex. They were showing off their first foray into the tablet market with a Packard Bell branded Google Honeycomb Tablet PC.

The Packard Bell 8501 is running a Nvidia Tegra 2 dual core 1 GHZ processor and has a 10 inch capacitive touchscreen display. The resolution is 1280x 800 which is very solid and should provide some good picture quality versus some of the other lower range tablets out there. It has 1 GB of RAM and 16 GB internal memory and you can increase the memory up to 32 via the Micro SD. The Camera quality on the rear facing camera is around 5 MP while the front facing camera is 2 MP.

It of course has WIFI and bundled with a 3G connection, no idea if the 3G is optional or if the one tablet is bundled with both. It

This Packard Bell Tablet really brings the company back into relevancy in 2011 with a solid hardware offering! It will allow customers to of course browse the Android Market and get a ton of extra applications. We did not notice any kind of custom Packard Bell UI options or any special programs and there was problems switching the display from landscape to portrait mode with many of the applications.

Finally from some research we did during the Computex tradeshow we were told that the Packard Bell Tablet is basically a rebranded Acer Iconia A500.