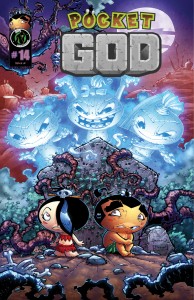 Ape Entertainment, creators of the wildly popular Pocket God game for iOS, released a comic book series to accompany the game and delve a little more deeply into the story lines of the game. The most recent addition to the digital comic series, issue number 14, is the last issue before a whole new story line comes out.

GoodeReader talked to David Hedgecock, CEO of Ape Entertainment, about the comic line, the game app itself, and what’s in store for the pygmies of Pocket God.

“The Pocket God game app is a very popular game on the iPhone, and the comic has done really well. On average we’ve been in the top ten on iTunes since they came out. There have been over 600,000 units of paid downloads, which makes it probably the most popular comic book for single issue sales on iTunes. We are planning to release a new story arc with the next four issues,” explained Hedgecock. “We are just finishing up a total redesign of the app, which will be launching with the new story arc.”

One of the key questions for the creators and designers at Ape Entertainment was how they plan to take advantage of the newly released iPad retina screen and all of its ultra-resolution capabilities.

While several companies that produce engaging and award-winning content for iOS are content to stay with the iPhone and iPad platforms due to consistency in screen size and formatting, Hedgecock is looking forward to trying out the Pocket God comic series on Android devices as early as this summer.

“We’re currently working on the Android version of the application, and we hope to have that ready by summer. That market place is finally starting to mature and we want to get in there. We’ll probably end up putting the entire series up when we do, so Android users can have access to the entire series. The beauty of the digital comic space is it is an endless bookshelf. All issues are available all the time.”