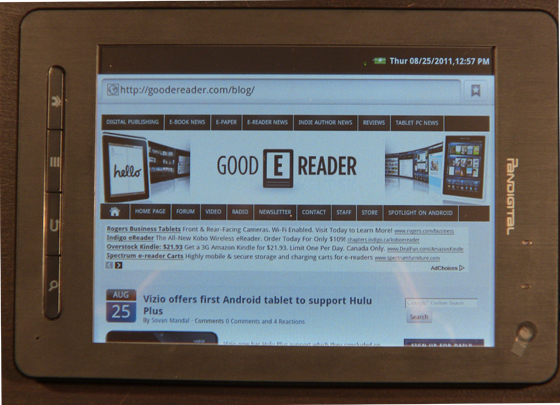 The Pandigital Nova is the most recent entrant to the ultra competitive market of lower end tablet computers. The company has been issuing hybrid tablets and e-readers since early last year with the Pandigital Novel as its first device. Pandigital continues to be popular because of its solid distribution chain with most popular electronic stores in both the USA and Canada and continues to be in the Top 5 in sales for e-reader devices.  How does it stack up against the competition and is it a good investment?

The Pandigital Nova is the followup to the Pandigital Star and Pandigital Planet that have been released in the last six months. The e-reader is a 7 inch resistive color touchscreen with a resolution of 600×800 pixels.  The one thing it has going for it on this model is that it is multi-touch, so  you can hit more then one key at the same time. This shines during keybaord typing and playing higher quality games.

Most of the Pandigital line of devices employ the resistive screen technology, which means there is a thin film on the screen. On the visual end I am not a huge fan of these types of screens because colors on video and pictures often look very washed out. You also cannot type or interact with the screen as easily as you would with a compacitive touchscreen device.  The Barnes and Noble Nook Color does so well on the market because it uses the capacitive screen and is easier to interact with. The Pandigital Nova ideally is used with a Stylus or with your fingernail. Aesthetically, the resistive touchscreen technology it uses does not really hinder the overall reading experience, because most books are black text on a white background. It is sometimes painful to turn pages because you need to be extra firm or have to use the tip of your fingernail.

There is a fair amount of internal memory in the Pandigital Nova that allows you store apps, games, and books. There is around 4 GB total, but you really only have 3.2 GB in the shipped model due to the space the operating system and default installed apps take up. You can also expand it up to 32 GB via a MicroSD card. Ram-wise, there is enough to run most things you would ever install on the tablet, which is 512 MB of RAM. This is the de facto standard on most low and mid range devices.

The audio experience on the Pandigital Nova is severely lacking! There is a single mono speaker on the bottom of the device. The worst part of this is when you hold the device in portrait mode and grip it on the left and right hand side, your hand covers the speaker. This gives you very muffled audio and I really cannot stand speakers that are on the bottom of tablet. You can get around this by plugging headphones into the 3.5mm headphone jack. Sadly, the Nova does not actually ship with headphones so you will have to get your own.

The one thing that boggles by mind on the Nova is how they built the hardware inputs and is in mind my mind a tremendous design flaw. The DC IN, Headphone Jack, Mini HDMI out is on the top of the device, rather than the bottom. This makes things very odd and hard to wrap your head around. Almost every single e-reader and tablet have these connectors on the bottom of the device. The Nova has only the headphone jack on the bottom of the side and the power button and volume buttons on the right hand side. On the left hand side you have the Micro SD slot.

Rounding off the hardware is two web cams! This is one of the first devices issues by Pandigital that actually allow you to do video conferencing, take pictures, and shoot video. The lackluster aspect is the feeble quality of the cameras with 1.3 MP on the rear and 0.3 VGA on the front. Do not expect any high quality pictures or video on either side, but it is a positive that the company is actually putting these new hardware features on their devices.

Finally, you can connect up to the internet via the WIFI and it has a moderately strong connection. You can use encrypted or un-encrypted networks and access hotspots.

In the end, hardware wise this is a tremendous positive step forward by Pandigital and moves the company in a positive direction. The dual cameras are something the average customer may find appealing for the price. This edition is also more pocket friendly with a seven inch screen vs the nine inch from the Pandigital Novel. 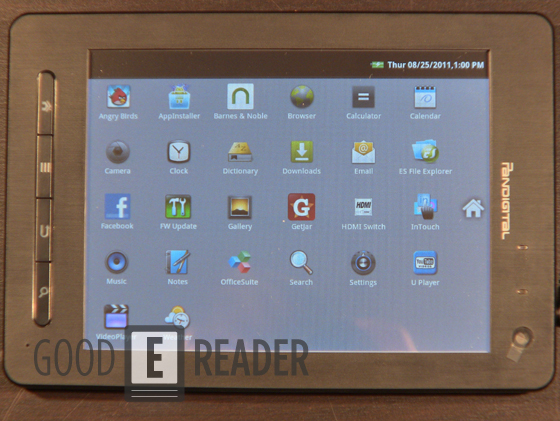 The Pandigital Nova is running Google Android 2.3! This means the screen is multi-touch and you can run live wallpapers. Previous versions of Pandigital devices ran outdated versions of the Google OS which made the tablet feel outdated as soon as it was released. Obviously, this is a low cost entry level tablet, so it does not have the hardware necessary to run Honeycomb.

The Nova uses the more recent firmware that displays almost a library shelf experience to your home screen. The main app you would use for your reading experience is the Barnes and Noble Bookstore.

The Nook Bookstore allows you to purchase a ton of content from the store, including many bestsellers. You can set up bookmarks and craft your reading experience with many different options, such as fonts.

One of the best uses of a color tablet/ereader hybrid is being able to read graphic novels, manga, and comic books on the device. It does not come with any apps to do this right out of the box, but you can download Droid Comic Viewer or other alternative apps. You can read CBZ and CBR type formats, which are the most easily accessible ones to find online.

With the Nova you are also not limited to just dealing with Barnes and Noble that comes loaded on the reader. You can of course load in the Android version of Kobo, Amazon, Borders, and many more. Remember the Barnes and Noble app only works for USA based accounts.

The Pandigital Nova does not have access to the Google Android Market but you can easily download apps from Getjar, which is included. If you live in the USA I would recommend the Amazon App Store as your destination app of choice to find new content. Not that Getjar is bad, but Amazon offers way more content and even free apps of the day. It is also organized more properly to find games and apps easier than ever.

The Nova comes with plenty of other apps to get you loving it right out of the box. It has a dedicated Youtube Player, music, audio, and other default apps that normally come preloaded.

Finally, let’s talk about the internet experience. The keyboard supports multi-touch so it’s easy to type web addresses in the search bar. Websites load rather fast, you can pinch and zoom, and it is very responsive.

Essential Apps for the Pandigital Nova 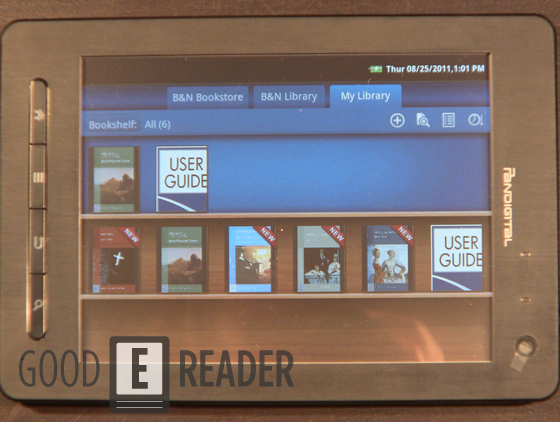 This device feels really cheap from the screen that they use to the overall hardware build. I really got thrown for a loop when they decided to put all of the inputs on the top of the unit rather than the bottom. The audio quality is really poor with the single mono speaker on the back of the device. It does have a wide application selection that comes pre-loaded on the device. The Android 2.3 OS is a solid addition to the Pandigital tablet lineup.

Pandigital does not really know what they are doing in terms of the construction of their devices. On the box there is conflicting information on whether they are making a tablet or an e-reader.

The $189 you would spend on this device at Best Buy might be better served purchasing the SkyPad Alpha, which is the same with specs but has way better functionality.