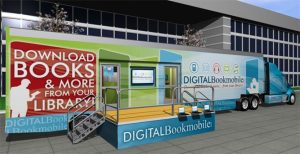 OverDrive, one of the nation’s leading ebook lending platforms that supplies the ebook titles to school and public libraries that offer digital lending services, will once again be bringing its tractor-trailer bookmobile on the road, this time attending this weekend’s National Book Festival in Washington, D.C.

Created twelve years ago by then-First Lady Laura Bush, herself a teacher and school librarian, the National Book Festival highlights authors and titles from around the country. This year’s festival, which OverDrive will highlight on its interactive 18-wheeler, includes the theme from the Library of Congress, “Books That Shaped America.”

According to an OverDrive press release:

“Now, the eBook trend is accelerating in schools, with millions of students returning to classrooms this fall with tablets, eReaders and smartphones. The OverDrive network now includes more than 2,000 schools serving more than 2 million students, and the distributor’s K-12 roster has tripled in the past eight months.”

“Students and teachers are embracing the eBook revolution in a big way,” says Steve Potash, OverDrive CEO, in the release. “And schools are benefiting from the huge success in eBook lending that public libraries have enjoyed over the past decade.”

Both educational and patron-use public libraries have suffered from the effects of ebook lending wars going on within the publishing world, A survey of publishers conducted by Aptara and Publisher’s Weekly earlier this year showed that 43% of those who publish ebooks do not let their titles be purchased for lending by libraries, largely due to concerns over piracy and how the publisher and author will be compensated, in spite of the fact that ebooks are loaned like any other book and maintain a one book, one checkout status with libraries.