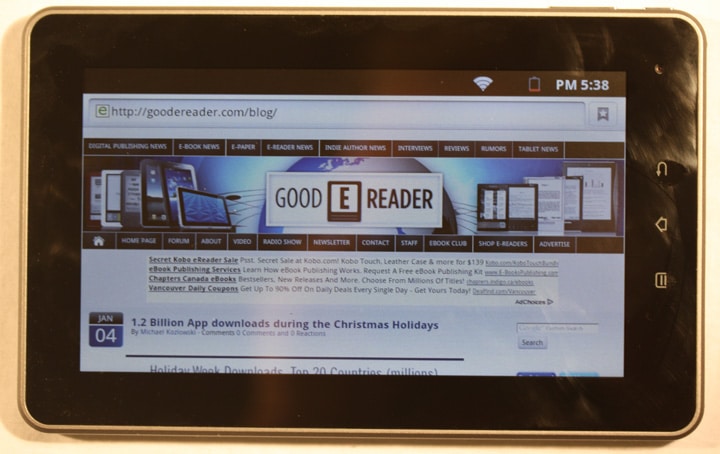 Skytex has had great success in the past using Groupon to sell their line of e-readers and tablet computers. There is a current deal of the day that should not be missed if you are looking at getting an Android Tablet that has tremendous bang for your buck. The Skypad Alpha 2 is available for only $125, which is a huge savings off of the normal price of $299.99!

The Skytex Skypad Alpha 2 features a 7 inch capacitive multi-touch display with a resolution of 800×480 pixels. It certainly will win no awards for the visual resolution, but it gets the job done by providing rich and vibrant colors. One of the ways it offsets the low pixel density is via the HDMI out, which gives you 1080P video if you hook it up to a projector or your television. It actually will also give you 3D video playback if you have a TV that will render 3D video.

The Skypad Alpha 2 is running the Google Android 2.3 operating system and this allows for a fair number of enhancements. You can run live wallpapers and it basically has support for 95% of all Android apps you will find in the market.

One of the surprising things I found about the content distribution system on the Alpha 2 was the default market that came bundled on the device. It comes with a market called the ’1 Mobile Market. If you are a regular Good e-Reader visitor you will know that we review every single e-reader that hits the market and a fair number of indie tablets. I have never seen a single device bundle with this particular market for apps and there was some trepidation on what to expect. Honestly, I was very surprised by the quality of apps that were available to download. This supersedes the Getjar and most other markets that either come bundled with a particular tablet or are available as 3rd party downloads. Everything is here in the 1 Mobile Market and you will get almost all the mainstream programs that are available on the official Google Android Market. On the front page there is common programs like Flash 11, Dropbox, Facebook, Twitter, Gmail, Google Earth, Twitter, Amazon, Barnes and Noble, Aldiko, and Droid Comic Viewer. All of the essential apps you will need are really just on the front page and you won’t have to search extensively for the big name programs you want to get on your device right away. I had to search for Task Killer and ES File Explorer, but they were all easily found and just 1 click installs. Surprisingly, this market dominates other competing devices at the same price-point, such as the Kobo Android Market.