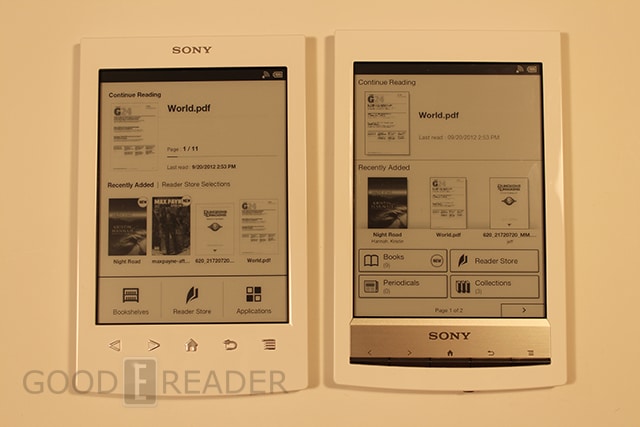 If you take a look at the hardware, there is not much of a difference between these two units. They both feature a fully touchscreen e-Ink Pearl six inch display with a resolution of 800×600. The TI is running a 800MHz Freescale MX50 ARMv7 processor while the T2 is on an updated 1 GIG processor.  Battery life has doubled in the T2 and the hardware buttons and design have been slimmed down and refined. The T2 is lighter in weight because it shakes the audio functionality that the previous generation of reader enjoyed. You will not find a 3.5mm headphone jack or anything else. I really liked the new hardware keys on the new model, they symbolize the buttons that launch a particular function. The home key has a picture of a house, so there is no confusing the functions. The Sony PRS-T1 had a single row of keys that all lined up together, resulting in users mistakenly pressing on the wrong button.

Both of these e-readers are running the Google Android operating system and are designed to read. Both models have the ability to connect up to libraries supporting Overdrive to borrow ebooks. The main difference is that on the T1 Google Books does not work at all, while it is absent entirely on the T2. Since Google consolidated its books program into Google Play, it threw a money wrench into Sony’s free book ecosystem. The T2 also has support for Facebook and Evernote. The latest model can also update the firmware right in the settings menu, where the previous generation had to be connected to your PC and run Sony’s Reading Software.

In this video we document every single hardware and software feature that makes these two e-readers different. We look at the hardware, and give you a full 360 of what they look like, side by side. Next we dive into the ebook experience and show you the various ways you can tailor the reading options. We also take a look at newspapers and complex PDF layouts and how the reflow options look. Next we show you the UI/GUI and a lot more.