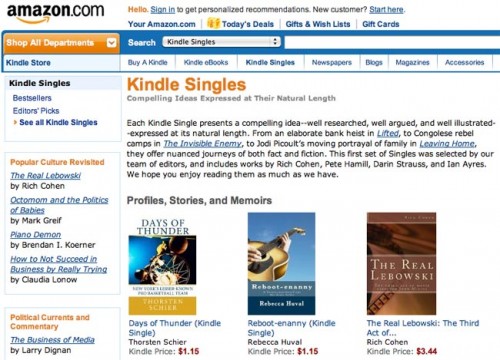 Leave it to the largest online bookseller-cum-publisher to come up with yet another way to reach out to a specific niche of the reading market. Launched in January 2011, Amazon.com’s Kindle Singles provides an opportunity for reading customers to find digital titles by established bestselling authors and up-and-coming writers alike that fit a very specific need. With publications whose word counts are limited to between 5,000 words and 30,000 words, Kindle Singles pieces are works that would be considered far too long for magazine space but are too short to be considered a traditional novel.

“We wanted to create a venue for these works while still finding the best work of this kind,” said Kindle Singles editor David Blum in an interview with GoodEReader.com Friday. “Aside from the word count, price is an issue in Kindle Singles, with all works costing between ninety-nine cents and $4.99. It keeps the works affordable and accessible.”

With around ninety titles in the Kindle Singles store to date, some of the top selling titles have been Christopher Hitchens’ obituary of Osama bin Laden entitled “The Enemy,” Tom Rachman’s “The Bathtub Spy,” Lee Child’s “Second Son,” and of course, the highly anticipated Stephen King short, “Mile 81.”

Despite the list of worthy authors whose titles are currently finding top spots in the Kindle store thanks to their publications as Kindles Singles—and many of the bestselling Kindle Singles are in the top 100 for all Kindle ebooks—Blum is always on the lookout for writers who haven’t published as much elsewhere, either traditionally or digitally, in order to bring their poignant works to light for Kindle readers.

But publishing a work to Kindle Singles isn’t quite the same as self-publishing an ebook through Kindle Direct Publishing. While both types of manuscripts would be placed in the Kindle store using that same upload process, in order for a work to be considered for publication as a Kindle Single, it must be read and approved by Blum personally.

“My role as editor is to read and evaluate what I think is the best content for our readers based on our knowledge of the Kindle customer. We look for compelling ideas. We’ve had remarkable success with writers through our submission process and through what we actively solicit from writers,” added Blum.

Currently, Kindle Singles has been very appealing to journalists who are enjoying the opportunity to write a more long-form piece or who are enjoying stepping outside of their usual writing style to experiment with a genre that their editors wouldn’t necessarily be interested in considering for their usual editions. Additionally, Kindle Singles has afforded readers the opportunity to read more in-depth works on very recent topics, as the timeline to publication has been improved by Kindle Singles’ use of a standard Kindle upload. Works such as Hitchens’ piece on bin Laden can be placed in the Kindle store while the news is still very current, rather than waiting for a print publication to bring it to the readers.