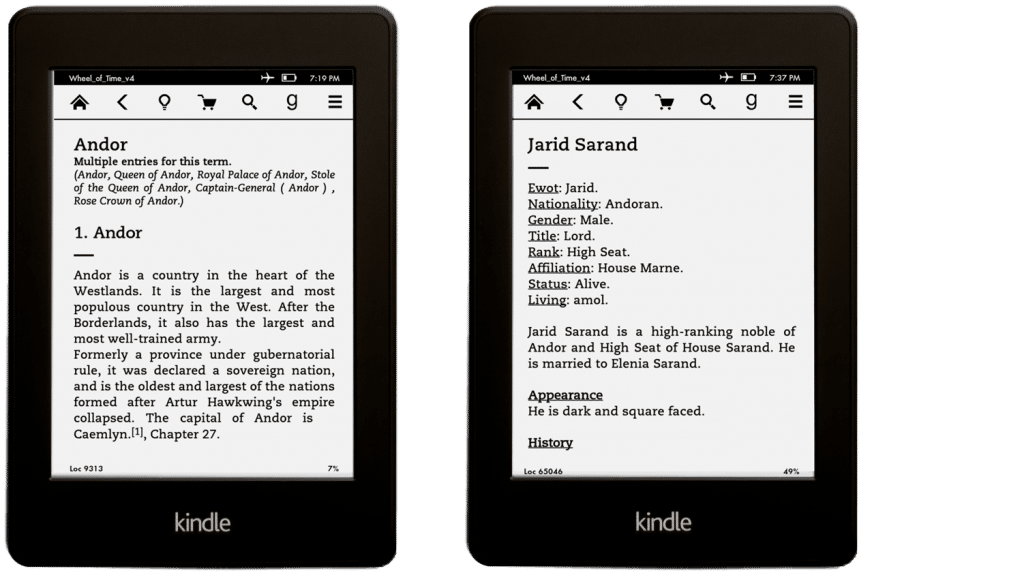 There is a new service that provides a dictionary for your e-reader and also gives you a sense of the people, places and things in an ebook you are reading. It is billed as an alternative to Amazon X-Ray and the main problem with X-Ray is that it can spoil things, such as a hidden character that is only revealed at the end of the book. The Fictionary dictionary is created to be a snapshot in time and as you progress through a book, it is updated.

Most Fictionaries contain thousands of entries displayed into an easy to read format. Advanced matching techniques ensure that variations and nicknames cross-match to the correct definition.

Fictionary currently works on e-ink Kindle devices,Kindle iOS apps (iPad/iPhone), and any software that can use the StarDict format such as the FBReader and Moon+ Reader Android Apps (requires ColorDict). Other e-reader such as the Nook do not allow easy switching to custom dictionaries either and store the dictionaries in a database format instead of an easier to create ebook format. I like the fact that unlike X-Ray, this system works across many different platforms.

There are only a few dozen Fictionaries currently available, as they have to be manually created. They are all free and include epic book series, that is easy to get lost with the sheer number of characters, such as Game of Thrones series and Wheel of Time.

The company responsible for the software has just created a portal for authors to create their own.