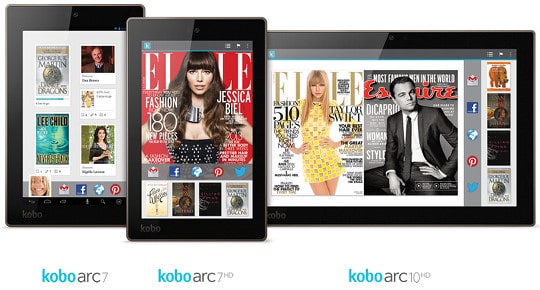 Kobo has been developing tablets since 2011, with the advent of the Kobo Vox. The Toronto based company has done a number of followups, such as the Kobo Arc, Kobo Arc 7 and Kobo Arc 10 HD. Increased competition from notable vendors such as Apple, Amazon Samsung and Sony have relegated Kobo branded tablets to a novelty and not a must buy. There hasn’t been a new Kobo tablet issued in a few years and many customers are wondering what has happened?

Kobo CEO Michael Tamblyn verified with Good e-Reader that his company has exited the tablet market. “The tablet devices we already have out there will continue to be sold, but we are not at this point planning any new tablets.”

Kobo has moderate success in the early years of the global tablet market because there were no clear industry leaders. From 2011 to 2012 it was basically the wild west with everyone and their mother releasing a new device and it quickly saturated the market. Apple, Amazon and Samsung have all proven to be the biggest players and they basically pushed everyone else out.

Kobo has confirmed with Good e-Reader that for the next few years they will continue to focus exclusively on e-readers.  This is primarily because more people buy e-books on e-readers than smartphones and tablets. Tamblyn recently stated that “Hardware is now a profitable business for us. Unlike some of the manufacturers who could never get the manufacturing or economics right, hardware made a profit for us in 2015.”

In an interview with Publishing Perspective Michael elaborated on why people tend to consume more e-books one e-readers. “The kind of customer we get through a device is worth about 30% more than through a smartphone. Book libraries are bigger. These customers are more loyal. They tend to read faster. That’s because they are already a person who is predisposed towards doing more reading. We have a great business on iOS and Android, but we can see from the data that the experience is more fragmented. Reading times are shorter and it’s broken up by text messages or social media. It is a much less immersive experience than on an e-reader.”