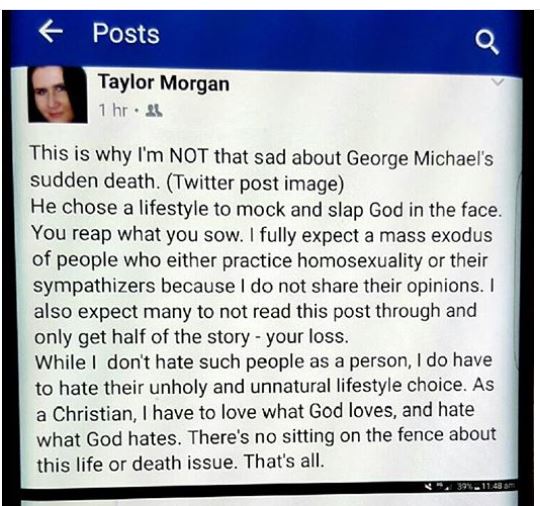 If social media has taught us anything, it’s that you probably shouldn’t be posting anything other than puppy pictures if you’re in any kind of business or industry. From Cinnabon’s well-intentioned flub at Carrie Fisher’s expense to Sarah Michelle Gellar publicly mourning the wrong British music icon on Twitter, it seems like all of social media serves as nothing more than a platform to screw up your brand.

Case in point: explicit romance author Taylor Morgan’s vitriol-laced rant against musician and philanthropist George Michael. The author, who also writes under the suspiciously similar-sounding pen name Phoenix L. James (sound like EL James to anyone else, along with her title, Fifteen Shards of Broken Glass?), has gone on a Facebook bender, starting with her unsolicited post claiming that Michael’s lifestyle amounted to nothing more than to “mock and slap God in the face.” The author went on to state, “While I don’t hate such people [homosexuals] as a person, I do have to hate their unholy and unnatural lifestyle choice. As a Christian, I have to love what God loves and hate what God hates.” Sadly, Morgan has continued to lash out at authors who disagreed with her, such as this post aimed at Parker Williams.

Obviously, social media followers were not pleased with the unnecessary rant. As George Michael does not feature in any of her books and as a number of M/M authors claim to be Facebook friends with her, the outburst was shocking and disturbing to a great many people. What is so interesting about this post from a reportedly devout Christian is that the content of her books speaks to a less-than-devout audience, including one book co-written under both of her names that features gods from Greek mythology, something that is outside the teachings of Christianity.

Unfortunately for Morgan, social media users know how to voice their concern. Apart from the responses to the author’s post, a number of individuals have taken to Goodreads to down-rate her books in the past few days, resulting in one- and two-star overall ratings on some of her titles. Interestingly, for some of the books, this was the only rating they received on the reader-centric site, leaving the door open to speculation as to whether or not this was simply an attention getting ploy.

For indie authors, the hard work of marketing and selling books is just as difficult as writing them in the first place. One of the cardinal sins of book selling is to take a public stance on issues that do not correlate to your genre, risking the wrath of a reading public. There is no clear benefit to this author or any other in disparaging a beloved icon who has passed, and authors would do well to remember that their livelihood is just like any other business: it’s precarious at best, and easily destroyed with one poorly chosen public comment.