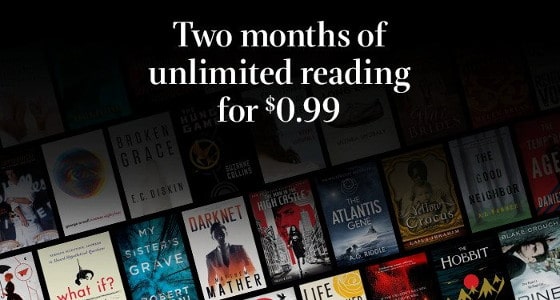 Amazon Kindle Unlimited has a library of over one million audiobooks and ebooks. 82 of these titles are among Top 100 Kindle bestsellers of 2017. Amazon is running a campaign where they are giving two months of access for 99 cents and it will automatically charge you $9.99 at the end of the promotion. Amazon has stated they are doing this because of World Book Day, but they are really trying to drive subscribers away from Scribd.

Scribd has been in the ebook arena since 2007 when they got their start as a document sharing site. Over the years they unveiled an unlimited ebook subscription service, suspended it and launched it again a few months ago. They found a business model that was viable for casual and power readers. They charge $8.99 per month and readers have audiobooks and ebooks from all of the major publishers. I have found that have more bestselling authors and have a better selection of digital content than Amazon.

Over the years Amazon did not have the support from major publishers, aside from a few specific titles. Most of their content stems from their Kindle Direct Publishing platform, so the overall quality of their ebook library suffers. The only way they can compete against Scribd is by offering tremendous discounts for people who don’t know any better. They pay authors out of a pool of many that changes every month. Scribd pays publishers after a certain number of pages have been read.

Amazon has just fired the first shot against Scribd.