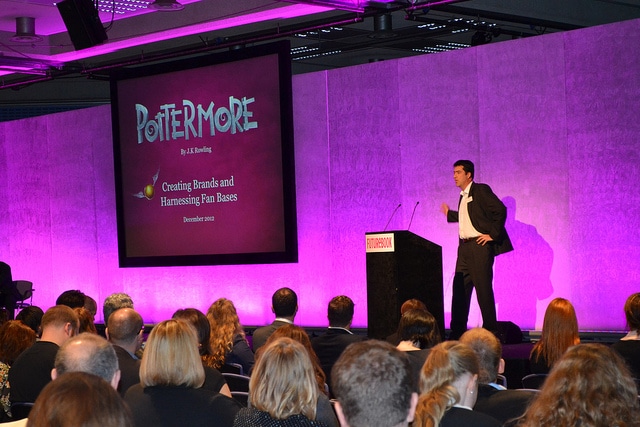 Charlie Redmayne spoke on two panels today in London at the FutureBook conference, the third annual conference put on by The Bookseller. Aside from the morning presentation in which he spoke on the importance of establishing a global brand for an author or a book series, Redmayne spoke quite vehemently in the later panel about how the practice of DRM-free ebooks can be better for publishing.

According to Redmayne, the Harry Potter ebooks were published without the restrictions imposed by digital rights management, allowing readers to put them on any device and allowing the sharing of the ebooks, similar to their print counterparts.

Despite some criticism about piracy concerns, Redmayne countered with evidence that piracy of the Harry Potter titles is actually 25% lower than when the titles were only available in print; additionally, he recounted incidences when the ebooks were actually placed on file sharing websites, but most were quickly removed when it became known that all of the ebooks are sold with an embedded digital watermark, essentially tracking the person who uploaded the pirated copy.

This ability to track an ebook stands to be a potential deterrent to piracy, especially if publishers are actually able to hold offenders accountable without creating a bigger problem in trying to prosecute offenders.