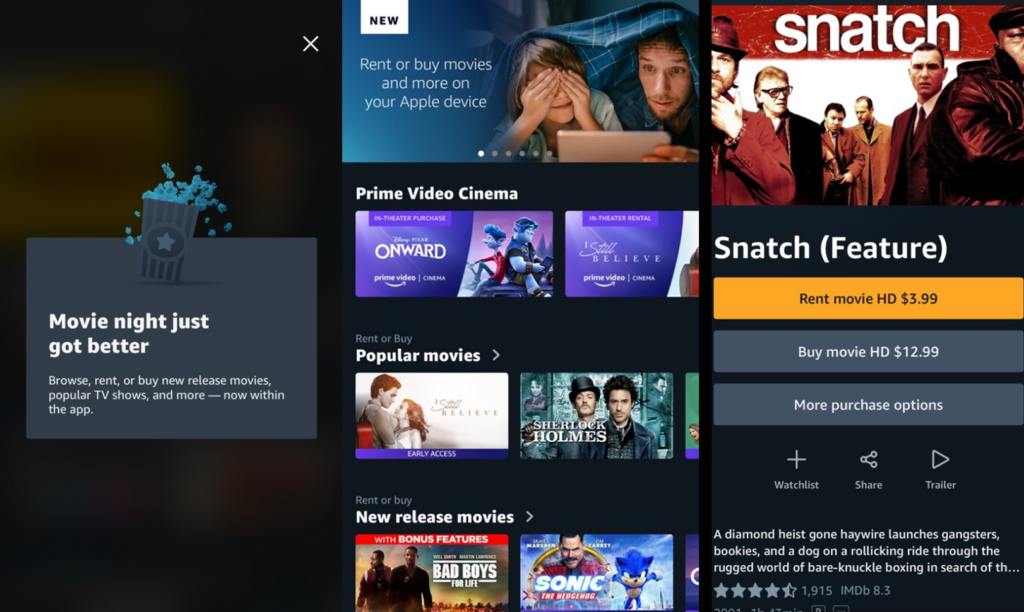 The Amazon Kindle app for iOS, which can be installed on the iPad or iPhone cannot be used to purchase ebooks. Instead, users have to visit the main Amazon website, purchase books and then sync them to the app, not very intuitive. Amazon might end up selling ebooks very soon on iOS, due to a very quiet landmark deal that was signed with Apple.

The Amazon Prime Video app quietly received buttons to buy or rent movies. Instead of Apple getting their 30% cut out of each digital transaction. Instead Amazon is running their own payment system, bypassing the need to pay with your Apple account. Existing Prime subscribers in the US can now buy or rent new movies, and stay locked into Amazon. New customers to Amazon Prime Video are being secretly routed through Apples login and payment system, but since Amazon and Apple worked out a deal, it is believed to be well below the standard 30% cut.

In a statement from Apple to Good e-Reader, the company said “Apple has an established program for premium subscription video entertainment providers to offer a variety of customer benefits—including integration with the Apple TV app, AirPlay 2 support, tvOS apps, universal search, Siri support and, where applicable, single or zero sign-on. On qualifying premium video entertainment apps such as Prime Video, Altice One and Canal+, customers have the option to buy or rent movies and TV shows using the payment method tied to their existing video subscription.” If this is true, where is Netflix, or HBO MAX fit in?

Apple and Amazon have deepened their company relationships in recent years. For one, Apple launched an official retailer section for its products on Amazon with Amazon agreeing to remove all third-party resellers. Apple Music, Apple TV+ and Apple Podcasts have also recently been rolled out to Amazon’s fleet of smart home devices.

Apple is currently battling both public perception and regulation efforts that hold that the company behaves anti-competitively in the marketplace, specifically with regard to how it handles services that compete with its own in its App Store. Apple has previously made some changes to combat those allegations, like tweaks to how Apple’s own apps and services are promoted in App Store search results. The allegations are similar in some respects to claims that Amazon favors its own products in its online store. Both companies are battling various lawsuits, but maybe this new change between Apple and Amazon will possibly lead to more digital content being exempt from the standard 30% rate, such as ebooks.