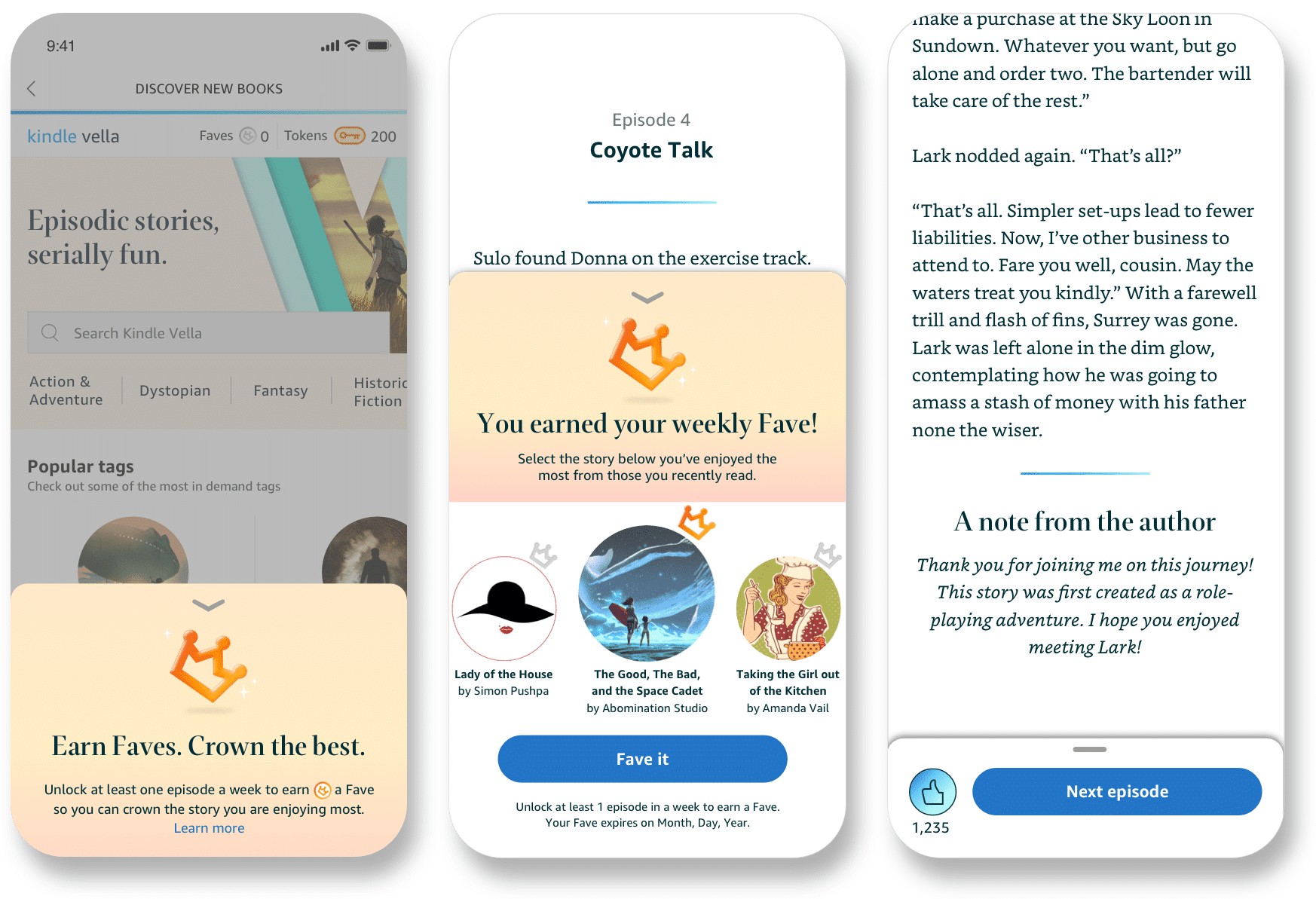 Amazon recently announced Kindle Vella, a serialized story platform. Authors can write stories between 600-5000 words and readers can checkout the first two chapters for free, before having to spend tokens to continue. The service will go live in the United States for readers in a couple of months, while authors can start publishing stories right now. Will you use Kindle Vella? 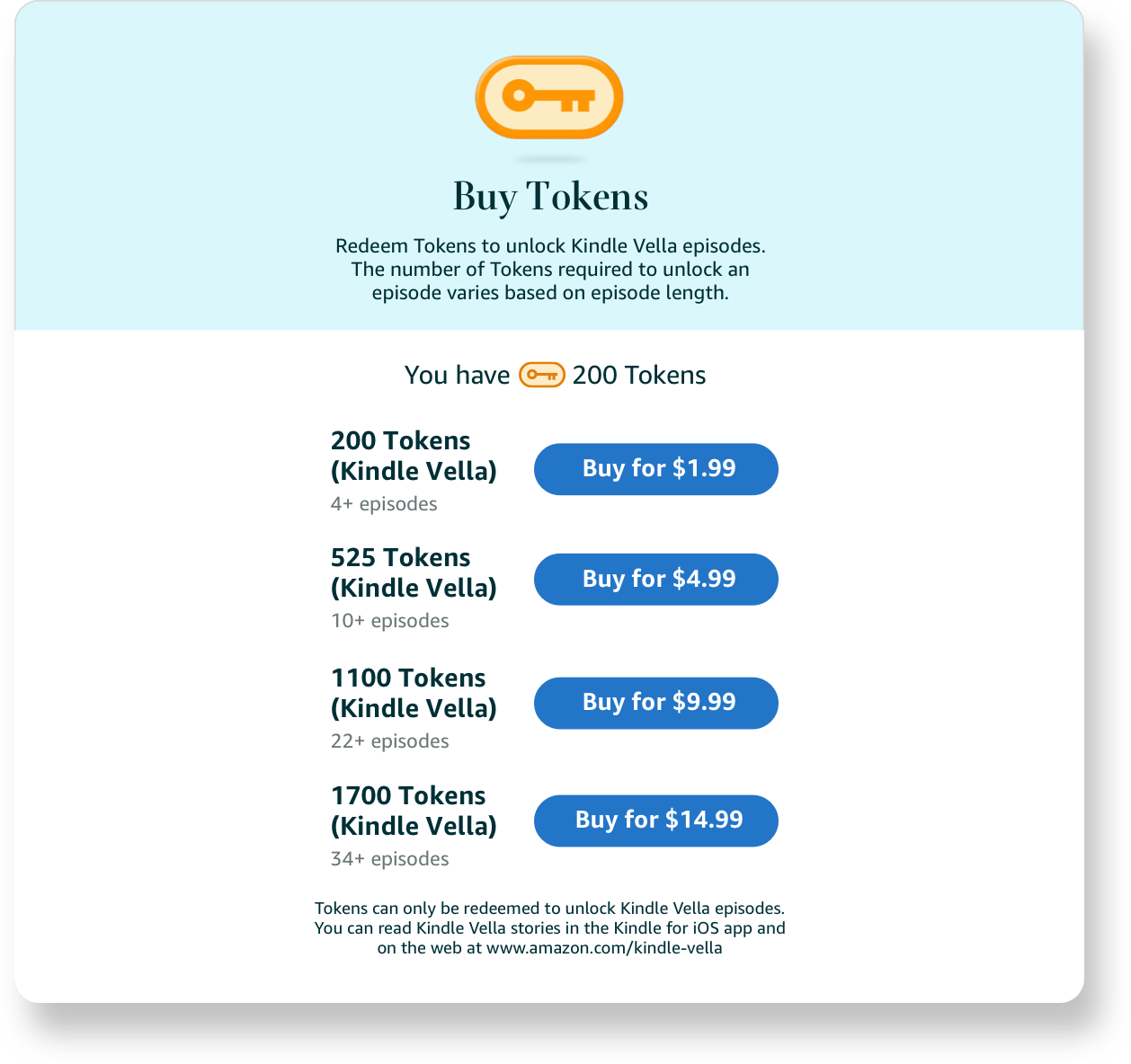 Kindle Vella Stories can be read in on Amazon.com and in the Kindle app on iOS, considering the name of the service, it is surprising that it will not be available on any of the Kindle e-readers. I do however, like the fact that the first few chapters are free, this will prevent unscrupulous authors from publishing gibberish, or text written by writing AI Bots. Tokens are fairly inexpensive, 200 tokens can be purchased for $1.99, which is good for 4 episodes and they range upwards to 1,700 tokens for $14.99, which is good for 14+ episodes. The number of tokens required to unlock an episode is determined by the length of the episode, so authors are incentivized to make their chapters as long as possible, to make more money, since they earn 50% of what readers spend on tokens.

The platform will also have a  social component, where readers can talk to the author, using author notes. Readers can leave a Thumbs Up for any episode they like. Once a week, readers who have purchased Tokens will receive a Fave to award to the story they enjoyed most that week. Amazon will then feature stories with the most Faves in the Kindle Vella store. This will hopefully let the best authors and stories rise to the top, and provide users with quality content.

One of the most controversial elements of Vella, is that if authors want to make an ebook of the entire story and sell it on the Kindle Store and also distribute it to other retailers, such Smashwords, Apple Books, Kobo or Barnes and Noble, they have to remove the story from Vella. I know many authors who will want to do this, but I would recommend against it. If an author has a number of Faves and is getting pushed by Amazon as a recommended read, it would be foolish to unpublish it, just to take a gamble to make more money and go wide. It remains to be seen if Amazon will have Vella stories appear in the Google Search results, so removing a story would actually hurt the author. Don’t forget, Vella is something entirely new and since many authors will likely not have heard of it before, the people who publish good content early, will generate the most money.

The Kindle Vella story format is not new, but has been employed by a number of highly successful companies. Tapas launched in 2012 and specializes in comics, novels and manga. They allow you to read the first five chapters for free, before you have to pay to unlock the rest. The Korean webtoons.com allows access to all but the most recent episodes, charging desperate fans a premium to get an early peek. So worldwide, pay per episode has already been proven to be lucrative.

In Japan, there is an entire industry based on text only serialized novels and Syosetu is the most popular. All the content is free, and publishers snatch up the hottest titles with book deals to spin off published books, which are normally called light novels. There have also been cases where they are also published in print manga and also anime.

Likely the posterchild for serialized novels is Wattpad, which is based in Toronto Canada. Over 70 million people spend over 22 billion minutes a month engaged in original stories, written by authors on the platform. All of the stories are available for free, which has been the key to their success.  Wattpad’s Story DNA Machine Learning technology allows the company to understand and discover stories among the more than 565 million uploads on the platform. Wattpad Studios and Wattpad Books are transforming entertainment and publishing, using data-backed insights to turn Wattpad stories into books, films, TV shows, and digital projects. Wattpad Brand Partnerships offers a full suite of advertising products to help brands build deep engagement with Millennial and Gen Z consumers. Tap by Wattpad, the company’s second storytelling product, offers immersive interactive entertainment experiences in over a dozen languages.

Will Kindle Vella be successful? Amazon already tried something similar with Kindle Serials, which lets customers subscribe to a serial novels. Buyers purchase the content up front, then have it delivered to their device automatically as new installments are published. It launched in 2012 and was not really ever promoted. Amazon seems to have their marketing machine behind Vella, but it is all about the content. When it launches, if the amount of quality and compelling stories, with great cliffhangers is poor, readers will not embrace the platform, nor pay for tokens.