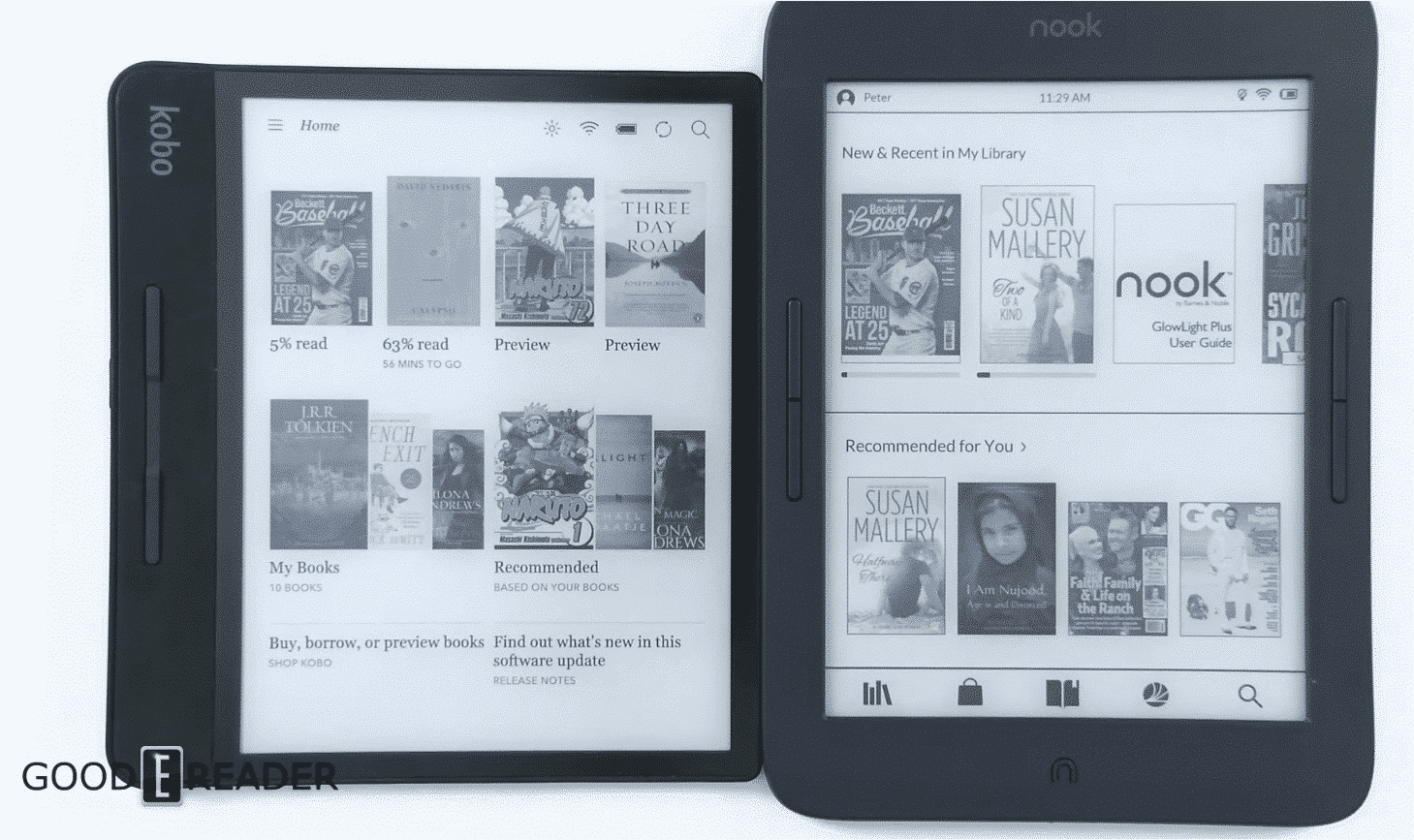 The Barnes and Noble Nook Glowlight Plus and the Kobo Forma both have giant 7.8 inch screens and are primarily geared towards reading ebooks. The major selling points of the Kobo is Pocket and Overdrive integration and a digital bookstore that has lots of manga. It can be accessed in most countries. The Nook has Readouts and the platform offers college newspapers, national newspapers and mainstream magazines, in addition to ebooks.

Kobo employs a front-lit display and also a Comfortlight color temperature system, so you will be able to read at night. The device has both white and red LEDS on the bottom of the screen and project light upwards. There are 17 lights total for even light distribution across the screen. You can make the screen, cold, warm or white, which emulates a real book. The Forma is also waterproof with a certified IPX8 rating, so you will be able to use it at the beach in the bathtub and it can be completely submerged for up to 60 minutes.

One of the biggest aspects of the Forma that many people are not aware of, is that it has an gyroscope that automatically switches the orientation of the screen 360 degrees. This is great for people who are right or left-handed. It is also ideal for digital manga, which purists want the controls on the left side of the screen.  You can read ebooks and PDF files in landscape or portrait mode and there is an option to lock the orientation, so the gyroscope is not always active.

The Barnes and Noble Nook Glowlight Plus 2019 edition features a E Ink Carta HD 7.8 inch display with a resolution of 1404×1872 with 300 PPI. It does not have a capacitive touchscreen display, instead it is employing Neonode zForce IR. You will be able to read at night via the front-lit display and it also has a color temperature system to help defuse the bright white light. There is an auto mode for the brightness, but the device does not have an ambient light sensor. Instead, it uses the clock to change the brightness, depending on the time.

There are 19 LED lights on the top of the bezel and project light downwards, evenly across the screen. There are 10 white LED lights and 9 orange ones. The vast majority of e-readers on the market have the LED lights on the bottom of the screen, Nook does things a bit differently. Overall, the lighting system is really polished. I noticed if you just have the normal front-light on, the screen has a bluish hue. If you engage in the color temperature system to the 30% mark, you get a glorious white screen, that is on par with the Kindle Paperwhite 4 and the Kobo Forma.

The new Nook is waterproof with IPx7 certification, which allows the device to be submerged in 3ft. of water up to 30 minutes. On a general level, it will be immune to spills from tea or coffee and can be used in the bathtub. If there are water droplets on the screen, it can still be used with the manual page turn buttons, but the touchscreen tends not to work. If it completely submerged in water, again the touchscreen doesn’t work, but the manual page turn keys do.

Underneath the hood is a Freescale Solo Lite IMX6 1GHZ single core processor, 1 GB of RAM and 8GB of internal storage. When you turn it on the for the first time there is around 6.9GB available, the rest is allocated towards the Android OS. It does not have an SD card, so this will prevent people from loading in a massive collection of content. I think it is important to note that this version of the Nook does not have any restrictions on sideloaded content and the internal drive does not have more than 1 partition, you can basically sideload in as much as you want.

The Glowlight Plus 7.8 has an 3.5mm headphone jack, but it is not for audiobooks. Although B&N does have an audiobook store for Android, they made the call not to include it on an e-reader. Instead it will be used to access the various Podcasts that Barnes and Noble produces. They tend to interview famous authors and literary figures every week or two. During out review, I could not find where the podcasts are located, maybe the system isn’t live yet. If this is the case, it should be solved with a firmware update.