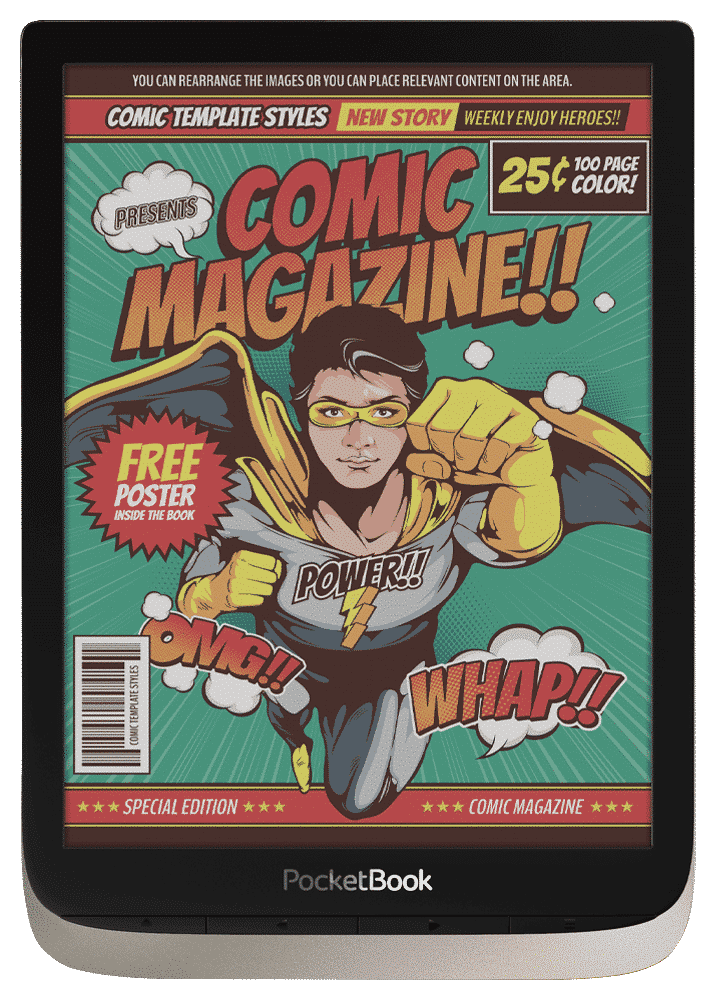 Pocketbook has just released a new color e-reader that is using the brand new E INK Kaleido 2 e-paper. This is the first mainstream device that is aimed at an international audience. It will make reading comics, ebooks, manga, magazines and newspapers bright and vibrant. It is available now for $319 from the Good e-Reader Store.

The InkPad Color features an E INK Carta HD and E INK Kaleido 2 color touchscreen display. The resolution of the B&W panel is 1872×1404 with 300 PPI, the resolution of the color filter array is 624×468 with 100 PPI and can display 4,096 different colors. It has a front-lit display, so you can read at night and the new CFA is now optimized for white LED lights that project light evenly across the screen.

Underneath the hood is a dual core 1GHZ processor, 1GB of RAM and 16GB of internal storage. It has an SD card, that supports up to 32GB of additional space, perfect for those of you with large digital collections. It has a G-sensor, cover sensor (for sleep covers) and WIFI, Bluetooth 5.1, USB-C and is powered by 2,900 mAh battery.

The Pocketbook InkPad Color is running Linux, which is the same Operating system the company has run for over a decade. This is how they can get away with a dual core processor and 1GB of RAM, because Linux doesn’t have a bunch of background processes like Android. Pocketbook always gets more out of their hardware than the competition.

PocketBook InkPad Color plays files in six popular audio formats, such as M4A, M4B, OGG, OGG.ZIP, MP3, and MP3.ZIP, which is great news for users who like not only to read but listen to books. The Text-to-Speech function also deserves special attention, turning any text file into voice playback in one of 16 languages. Thanks to Bluetooth technology, the e-reader can connect with wireless headphones or car audio-system, allowing non-stop listening. The e-reader also has a 3.5mm headphone jack, for wired headphones. If you prefer to listen to ebooks, there is a TTS engine, so it can listen to them aloud, it supports up to 15 different languages.  If you don’t speak English, there is support for ABBYY Lingvo dictionaries (24 language combinations), English – German, Webster’s Dictionary 1913.