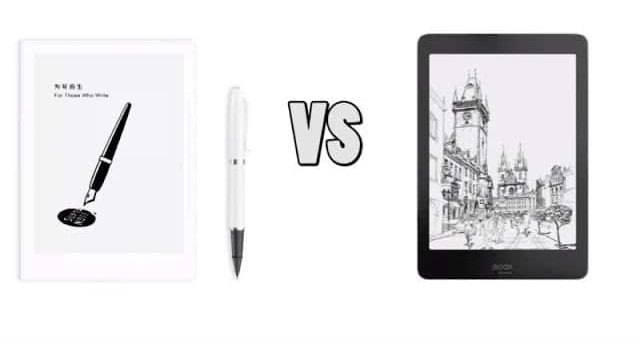 The Onyx Boox Nova Pro and SuperNote A6 are two 7.8 inch digital note taking devices. These two devices provide vastly different experiences, since the Onyx is running Android and has Google Play, while the SuperNote is running Linux. What one should you buy?

The Nova Pro features a 7.8 E-Ink Carta HD screen with a resolution of 1872×1404 and 300PPI. The screen is completely flush with the bezel. You can read in the dark via the front-lit display and it also has a color temperature system. You can have both lights on at the same time or chose one or the other. A color temperature system basically makes the screen emit less harsh white light when reading at night and can be optimized to display various levels of orange. The lighting system on the Nova Pro is fairly robust and the light can be shut off completely.

Underneath the hood is a 1.6GHZ quad core processor, which is the same one that the Onyx Boox Nova employs. There is 32GB of storage, 2GB of RAM, USB-C, 2800 mAh battery and Android 6.0. This device has Google Play available and this will allow you to install any apps you already have on your smartphone or tablet, right on the e-reader. It also is compatible with Google Play Books and other Google branded apps, since it has the Play Framework already installed, out of the box.

The overall design of the Onyx Boox Nova Pro is rather minimalist. It has a sleek black chassis with a home button on the bottom of the front of the unit. It also has a USB port on the bottom and there is no SD card, so you have to make due to the internal storage. There are no speakers or a 3.5mm headphone jack, but it does have Bluetooth so you can listen to audiobooks, music or podcasts with a pair of wireless speakers. The back of the e-reader is fairly bare, it is made of hardened plastic and has the Onyx Boox logo.

The SuperNote A6 also has a 7.8 screen, and is employing E Ink Carta HD and Mobius. The overall resolution is 300 PPI and underneath the hood is a IM6 Solo Lite single core processor, 1GB of RAM and 32GB of internal storage.

One of the big advantages of the SuperNote are the stylus. It has a plastic film on the screen and the nibs are very small and it feels like you are drawing on paper. The Heart of Metal series is their new stationery products, they come in like 10 different colors and the nib is razer thin, it is easier to draw on the SuperNote than the Onyx. Onyx has a simple plastic stylus and a plastic nib, like most digital note taking devices, SuperNote wins out with their vast array of choice.

The drawing experience on both devices are fairly similar. You have all sorts of options and both devices have palm rejection and 4096 different degrees of pressure sensitivity. Their are different backgrounds, depending on if you are doing sheet music or college rules. Both devices have many different options like drawing shapes and inverting them.