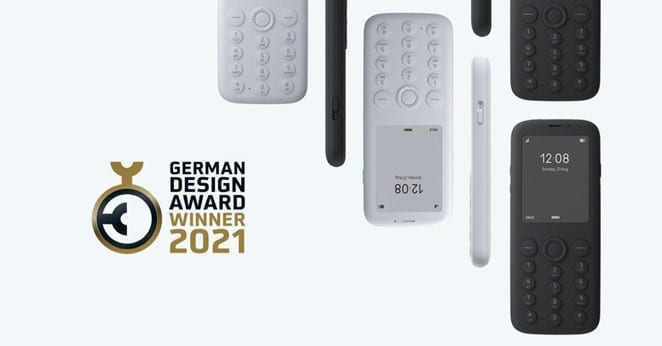 The Mudita Pure E INK phone received the German Design Award 2021 in the category “Excellent Product Design – Computer and Communication” category. The title is awarded by the German Design Council. The list of winners has been officially announced this week. The award will be presented at the official award ceremony in February 2021.

The jury made the following statement regarding the award granted to Mudita Pure: “Superficially minimal, clean and contemporary, the Mudita Pure is a gentler mobile phone with an eye on mindfulness and wellbeing that is highly evocative of zen philosophy. The Pebble Gray color and harmonizing display blend with familiar controls. The functionality is deliberately pared down to the bare essentials, yet the phone nonetheless caters to all important contemporary communication needs.”

“We are very happy that the design and style of our phone have been noticed and awarded by such valued specialists. The German Design Award is one of the most important international design awards, awarded for the best work in the field of product design and communication. We are glad that Mudita joined the group of winners.” – says Małgorzata Szostak, Head of Design at Mudita. – “During the design work on Mudita Pure, we focused primarily on the usability of the product. We were inspired by Japanese and Scandinavian design. We wanted to create a phone which will serve its users as long as possible, and its appearance will be independent of trends. The German Design Award 2021 is a great honor and we are pleased that our values presented in this phone have been appreciated by a group of experts, but the most important thing for us is the satisfaction of Mudita Pure users.”

The German Design Award is one of the most renowned design awards in the world and enjoys an excellent reputation which goes far beyond the circle of experts. Participation in the competition emphasizes the commitment of companies and designers to strive for excellence.

Mudita recently delayed the release of this phone until next year. The company has also announced that their OS is going open source on GitHub.