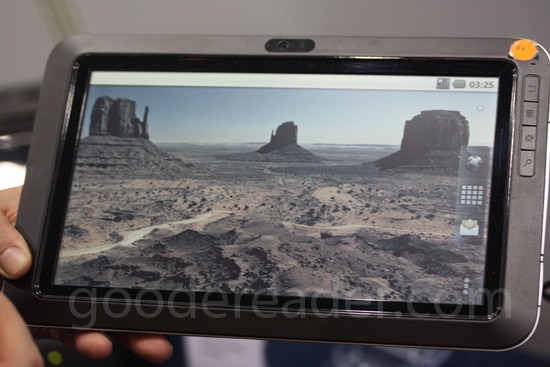 3M Ventures an investment arm based in Germany has just invested in Pixel QI for next generation mobile display screens.

Pixel QI has finally found the suitor that it has been looking for the last few years to bring its products into the mainstream. The core basis of its technology is to provide low cost LCD screens that are readable in direct sunlight. They also mimic the traditional e-ink experience and side by side with Kindle display text in ultra high resolution.

The company was formed in 2008 and its claim to fame was with the ‘One Laptop Per Child’ initiative that targeted Africa where there was plenty of sunlight and a demand for devices that were either solar powered or low in cost. Their technology is showcased in devices such as the Notion Ink Adam and in the ZTE Android tablet.

Pixel QI has been one of the companies we have been very high on since we conducted interviews with John Ryan and CEO Dr. Mary Lou Jepsen at CES and Computex in Taiwan. Their display screens were seen in laptops, tablets and even phones. The one thing I really liked about their technology was that despite the fact it is low cost they provide high quality screens that are perfect for the mass market.

Many people are disappointed with tablets and phones battery life. The average device has a maximum ability for about 10 hours of use before you have to re-charge it. Pixel QI screens would be perfect to extend these charging cycles to double the time because of the low wattage the screens draw from the battery. Stefan Gabriel, President of 3M New Ventures said: “Pixel Qi’s technology enables displays of such lower power and high usability that the vision of ubiquitous displays comes much closer to realization. In combining Pixel Qi’s disruptive display technology with our technology platforms, we can create new business opportunities in the consumer and commercial markets for 3M.”

Pixel QI intends on using the undisclosed sum of money to increase its sales and R&D to innovate new products. If you are unfamiliar with the company and its display screen technology check out some of the past interviews we conducted with them and gain an introspective on how the screens work and look aesthetically.

As consumers increasingly rely on connected, mobile devices in their daily lives, there is a growing, unmet requirement for display devices that offer portability, connectivity, long battery life and excellent indoor / outdoor readability in one device. Current displays are not able to solve all of these challenges simultaneously. Pixel Qi’s unique technology platform eliminates the need for trade-offs and enables high quality, outdoor or sunlight viewing with excellent battery life and portability in one device. The combination of its technologies with 3M will create excellent new opportunities for both companies.
“Pixel Qi’s full-function color screen technology, for the first time, gives consumers an outdoor-readable video display with exceptional battery life, usable anywhere, anytime. It’s a first in the industry. In our collaboration with 3M, we have the ability to accelerate this into mass adoption,” said Mary Lou Jepsen, co-founder and CEO of Pixel Qi.

The funding led by 3M New Ventures will play a key role in enabling Pixel Qi to develop its product offerings into volume consumer markets as well as digital signage and touch applications. The investment, which successfully concludes Pixel Qi’s second (series “B”) investment round, will also allow Pixel Qi to build and to strengthen its engineering and sales capabilities.

Stefan Gabriel, President of 3M New Ventures said: “Pixel Qi’s technology enables displays of such lower power and high usability that the vision of ubiquitous displays comes much closer to realization. In combining Pixel Qi’s disruptive display technology with our technology platforms, we can create new business opportunities in the consumer and commercial markets for 3M.”

3M’s Optical Systems Division is a world leader in the specialized films used inside liquid crystal displays to optimize the light throughput. Pixel Qi’s innovative LCD designs leverage such film technologies, and other advances, to create novel displays and enable the best outdoor readable, power efficient displays available on the market. “By addressing the energy consumption and sunlight readability challenges in one package, Pixel Qi provides a ground-breaking solution for the next generation of displays”, said Jim Bauman, Vice President of the Optical Systems Division. “The combination of Pixel Qi’s low-energy, reflective display technology with 3M’s innovative technologies will create exciting products for the mobile, handheld, tablet and other display markets.”

3M New Ventures is based in Munich, Germany. This business identifies highly innovative companies and future technologies. These opportunities include investments in the strategic sectors of display, energy, water, architecture, media, healthcare and safety and security, with linkages to 3M. Recent investments made by 3M New Ventures include minority stakes in Perceptive Pixel Inc., a developer of advanced multi-touch solutions; Printechnologics GmbH, a printed electronics specialist providing innovative solutions for electronic circuitry on paper or foil; and txtr GmbH, an innovative eReading technology company. 3M recently received the ‘Best Innovator’ award in Germany for its best-in-class innovation management and corporate venturing.

Pixel Qi Corporation, is based in San Bruno, California and with principal offices in Taipei, Taiwan, and aims to design innovative LCD screens which solve problems not addressed by conventional screens. Its first products are sunlight-readable, low-power LCD panels aimed for mobile device applications. Operating as the industry’s first fabless display house, Pixel Qi designs all layers of the LCD, including each and every mask, the liquid crystal mode and material, the optical films, the driving scheme and the backlight. Pixel Qi is a spinoff of One Laptop Per Child, the creator of the $100 laptop, where Pixel Qi CEO and founder Mary Lou Jepsen was chief architect and chief technology officer.

The “qi” (pronounced ‘chee’) in the firm’s name, refers to the circulating life energy that in Asian philosophy is thought to be inherent in all things
For further information, visit www.pixelqi.com
Trademarks are the properties of the respective parties.[/showhide]