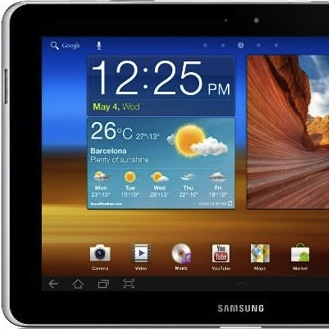 The Samsung vs Apple legal tangle has been one of the most keenly watched affairs of recent times with Apple walking away with most of the accolades so far. This since the court in Germany had ruled against Samsung on the ground that its Galaxy Tab 10.1 bears too close a resemblance by way of its looks and feel with that of Apple iPad. This was a result of Apple having filed a law suit on this aspect and won a ruling that stopped Samsung from selling its Galaxy Tab 10.1 in the German market it its present form. Samsung went about making amends and they have now come up with a modified version of the tablet which they have named as the Galaxy Tab 10.1N.

Apple surely are having a hard look of the device to make sure the popular 10 inch Android tablet stays clear of its design patents while we do the same here too with help of NewGadgets.de who have got hold of the Samsung tablet to find out just what makes the the versions different. However, a close look at the changes they have effected would reveal it’s only of the periphery of the device where most of the changes have been done. Clearly, the most distinctive aspect of the new 10.1N tablet is the metal lip which is seen around the device and also across the bezel. The speakers too have been re-positioned and that’s about all the changes that one would find comparing it with the banned version. The video below brings this to the fore more effectively.