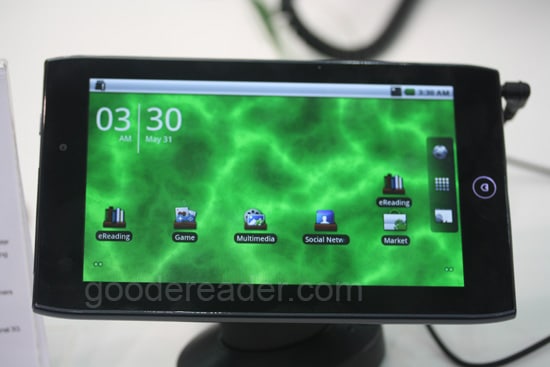 Acer had many variants of its Iconia family at Computex this year in Taipei and the A100 Android 2.2 Tablet felt like direct competition to the older Samsung Galaxy Tab.

The Acer Iconia A100 is a 7 inch capacitive touchscreen tablet with a resolution of 1024×600. The processor is a Nvidia Tegra 2 dual core 1 GHZ processor and made the unit very responsive to our hands on tests. The spec sheet Acer had at their booth only proclaimed the tablet to have a woeful 512 MB of RAM which certainly won’t win it any awards but when we looked at the settings menu it said it had 1 GB of Ram. Internal memory was relegated to around 8 GB but of course you can expand that up to 32 GB via a Micro SD card. It has a front facing 2 MP camera for video conferencing and a rear facing 5 MP camera. The rear facing camera stood up well to our tests and did both video and pictures admirably.

The Iconia A100 only had 1 physical button on the unit which was a Home button, there was no back or settings button at all. Acer is billing this tablet as direct competition to the 7 inch Samsung Galaxy Tab but the Tab has a home, settings, back button where as the A100 does not. I found this has been extremely dissatisfying because it made the Tablet a little bit clunky to use.

The entire Iconia line of tablets has a docking port on the bottom of the unit that allows it to be hooked up to an external keyboard, which should win some points for people who don’t like to exclusively type via the touch screen display. Finally for hardware it has a Mini HDMI, Mini USB, 3.5 mm headphone jack and stereo speakers. Weirdly enough both speakers were on the side of the unit and not on either side, but all on one side, which make the sound a bit muffled if you were holding it in landscape mode.

The Iconia A100 software wise is packaged with a custom Acer UI that gives you special menus that serve as mini portals to applications on your unit. They have Entertainment, Game Center and an e-reading area. We saw the Kobo e-Reader application and ditto with the Barnes and Noble Nook App, no word if this will ship with the unit, but normally when a tablet launches they don’t normally bundle competing applications against each other. My thoughts is that they will launch the A100 in Canada with the Kobo app and in the USA with the Nook for Android.

Speaking of e-reading applications one of the saving graces with this A100 was the fact it was bundled with the Acer Lumiread application. This allows you to pinch and zoom PDF files and ePub books to allow a greater flexibility in the way you read. It also has around six different font sizes to make things smaller or larger depending on your personal preference. There is also a nice night time mode that displays white text on a black background.

In the end, there will be two versions of this tablet the A100 which is the WIFI only model and the A110 which will have WIFI and 3G. Unless its bundled with Android 3.0 I can’t really see this tablet take off because it feels clunky in the your hands, where as the Samsung Galaxy Tab feels a bit more polished.