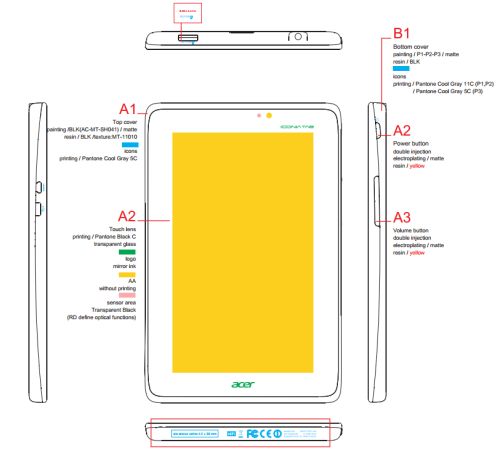 The Iconia Tab A110 forms part of Acer’s contribution to the budget tablet line of devices. Touted to cost less than $200, the tablet was first seen at the Computex Trade event held in Taiwan. A couple of months down the line, the tablet has made the long journey to the FCC, which means the tablet is going to hit markets in the US sooner rather than later.

The price tag also means the A110 will be in the same territory as the Nexus 7. The specs are also strikingly similar, which include a NVIDIA Tegra 3 Quadcore processor, a 7 inch display with a resolution of 1024 x 600 pixels, 1 GB RAM, and an internal storage space of 8 GB. However, the Acer offering also includes a microSD card slot and a micro HDMI port even though it packs a few pixels less than the Google tablet.

FCC listings have never been known to reveal a lot of details, though the images show that the tablet will be far from the slimmest around. We are keen to know what the OS will be, as well as other details like launch dates and so on.