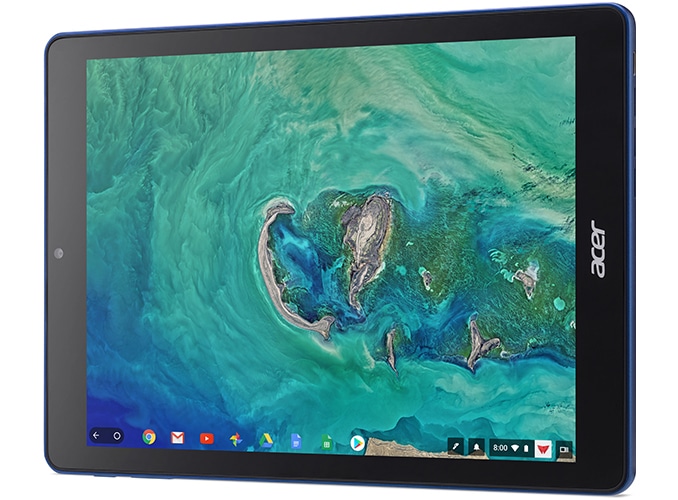 Acer is going to be launching the world’s first Chrome OS tablet next month for $329. The Chrombook Tab 10 will primarily be marketed as a digital note taking device and will come with a Wacom EMR stylus. It will also have Google Play support, so you will be able to download tons of apps.

The Chromebook Tab 10 features a 9.7 inch screen with a resolution of 2048×1536 with 264 PPI. Underneath the hood is a Rockchip OP1 processor which incorporates two high-performance ARM Cortex-A72 cores, four energy-efficient Cortex-A53 cores, supports hardware decode/encoder for UHD 4K video, and has a number of Chrome OS-specific optimizations designed to improve user experience (and brought in by Google). The tablet is equipped with 4 GB of RAM and 32 GB of onboard storage and SD support. There are two cameras 2MP up front, 5MP at the rear. There’s also a battery-free Wacom stylus and a slot for it to live in, a USB 3.1 Type-C Gen 1 port, speakers, headphone jack and microphone.

This device is meant for schools, since consumers have failed to embrace Chrome OS in a meaningful way. I have used a few Chromebook laptops in the past year and they are actually pretty great. Chrome is really lightweight and relies primarily on cloud based apps, like Google Docs, Sheets, dropbox etc. Late last year the OS gained the ability to run Android apps, which has moved the needle on adoption rates. This was done because developers were simply not making dedicated apps for the OS.

Will this tablet be forgotten in a week? That remains to be seen. It is the world’s first Chrome OS tablet and should be on retail shelves soon. The big question is will Acer issue updates and stand behind this product?