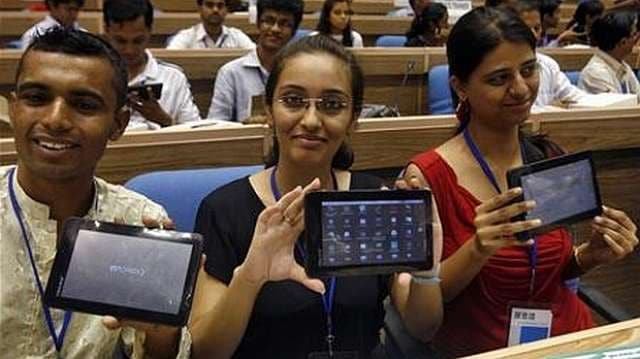 The world’s cheapest tablet has met with a resounding success so far going by the volume of pre-orders notched up till now. In fact, pre-order booking figure of 3 lacs for the tablet costing Rs. 3000 has already gone past the total size of the tablet market in India which stands at just 2,50,000 as of now, including those from Apple and Samsung. That the Aakash helped with a price tag of Rs. 2,999 would be able to scale even higher sales figure perhaps goes beyond all speculations and study graphs. However, while deliveries are slated to begin next month, Datawind — the maker of the tablet has already started distributing the same at some schools and colleges free of charge.

“The bookings for Aakash have been done without any money received in advance. We have identified an operator for a data plan at Rs 99 a month, ” said Datawind CEO, Suneet Singh Tuli. Low price for internet access has been achieved by the Datawind team by using data streaming technology.

“We hope to make internet free on our devices with that technology,” said Tuli.

The choice of network operator is being kept under wraps as of now though chances of it being Aircel is high.

Reliance 3G Tab was the first one to start the trend of a low cost tablet followed by Beetel and mTab. Akash has however added a fresh rush into the price riot amongst tablet makers with all of them rumored to be looking for technology that would allow them to come out with lower priced tablets. Reliance has been active and announced a 4G capable tablet which would be priced at Rs. 5,000. Datawind is not going to stop with the present version of Akash and are plans are on the drawing board for a faster tablet which would come with capacitive touch screen technology as the next version. The tablet would also have the facility to connect a keyboard and the total price would be Rs. 3,400. There is talk of a next gen Akash as well that will have a faster processor but with no change in the price tag.

“The governments of Mexico, Sri Lanka, Egypt, Thailand, Brazil, Bangladesh have requested us to participate in programs similar to India. None, though have come out with tenders for supply of low cost devices as of now,” Tuli said as a sign of the Akash tablet’s growing international reputation.