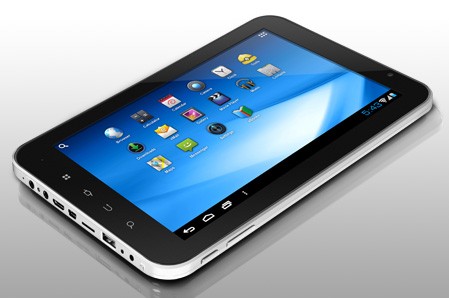 Aluratek is best known for its extensive line of e-readers that have been available on the market for the last three years. The company has just released two new models of their CinePad line of Android 4.0 tablet computers! They have both a seven and a ten inch model and both have some solid hardware and low prices.

The first model they have out is a seven inch version with a resolution of 800 x 480 and the official name is the AT107F. It features a five-point capacitive multi-touch screen. It is powered by a Boxchip A10 cortex A8 1 GHZ Processor and 512 MB RAM.  You have around 4 GB of internal storage for your media, books, and music. You can elect to expand it via the MicroSD Card up to 32 GB.

There are a number of cool hardware features found on this model, such as a Mini-HDMI to give you hi-definition video on your television. It also has a speaker, microphone, WIFI, 3.5 MM headphone jack, and front facing webcam.  It has a solid battery life via the  3.7V / 3000mAH battery, which should give you around seven hours of constant use. Finally, it is shipped with Android ICS and fully supports HTML5.

The 10 inch model is dubbed the AT110F and it has a bit better of a processor—the Amlogic cortex A9 1 GHZ edition. This model has a 10 point multi-touch display with a resolution of 1024 x 600 pixels. The RAM is also boosted on this model with a very respectable 1 GB. You can store way more media with the 8 GB of internal memory and support for 32 GB of microSD expandable storage. There is also a ton of ports and extras, such as micro-HDMI, USB, Bluetooth, WIFI, and VGA-Webcam.

The CinePad line of Ice Cream Sandwich tablets has been a long time coming and they finally have a solid line of tablets. The pricing structure is fairly solid, with the seven inch model costing only $149.99 and the ten inch edition is $219.99.