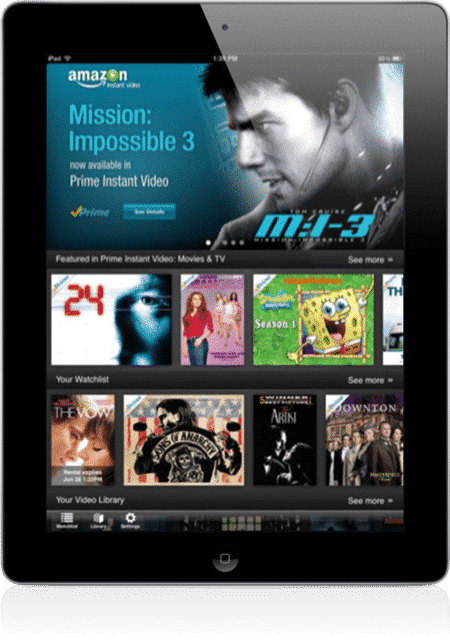 If you own an iPad and had envied Kindle Fire owners who enjoy access to the Amazon Prime store, you are in for some good news. Amazon has developed an iOS compatible app that will open up its Prime selection of videos and other content to iPad owners. This is something that is really incredible as not only is the iPad with its retina display a superb device for watching videos, the Prime too has more than 120,000 videos to offer. There also are more than 17,000 instantly accessible movies (some being among the recently released) and TV episodes available to subscribers as well. With that much on offer, there surely will be something to suit every individual’s taste and preferences.

Also, a really nice aspect of the Amazon video app for the iPad is that even allows for offline viewing. So any purchased or rented video which shows up in the Library section of the app can be downloaded to the local memory for viewing later at user’s convenience. If the video is paused, the integrated WhisperSync technology will ensure the setting is saved in all other devices such as the Mac that is also compatible with Amazon Prime and has been logged in to the service using the same account. Unfortunately, Apple’s other immensely popular devices such as the iPhone or the iPod cannot be counted among such devices, as the app right now isn’t compatible with these. That said, the iPad with its 9.7 inch display, is just the right size for watching videos on the go.

Among the other features of the Amazon video app for the iPad include Watchlist which essentially is a queue that you have made of all the movies or TV shows that you’d like to watch in the preferred order. Also, with the list being in the cloud, one can always make changes to it from any other device.

However, the Amazon Instant Video app will not allow you to buy or rent directly from the app itself, as this would entail giving away 30 percent of the transacted amount to Apple. Users won’t even be able to browse the videos that are available. Instead, all of those has to be done directly from a browser, be it from the tablet device itself or any other computing platform such as a laptop.

Amazon Prime is available on a $79 per year contract. Until now the service was only exclusive to owners of the Kindle Fire, though tapping the huge iPad consumer base does make a lot of business sense that Amazon will surely not want to let go of.

All in all, the Amazon Instant Video app provides for a nice new way to watch videos and shows from the iPad. The move to offer Amazon Prime services on the iPad also shows just how keen Amazon is to see its content business grow. The likes of Netflix, Hulu Plus, or Apple’s own iTunes just received a new competitor on the battleground for the iPad.