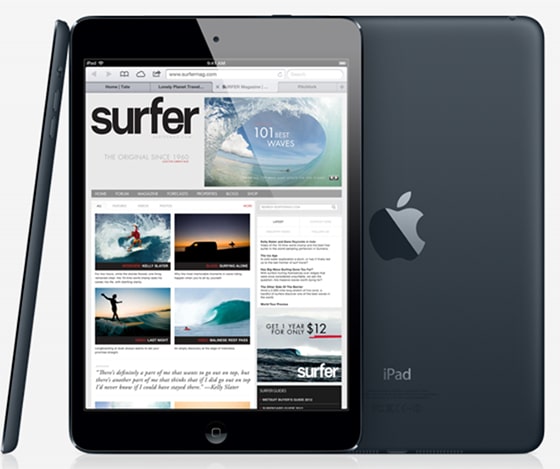 After lots of speculation, Apple has finally taken the wrappers off of the new iPad Mini. It is significantly smaller than previous iterations of the iPad with a 7.9-inch display and a resolution of 1,024 x 768 pixels, which is the same as the iPad 2. Underneath the hood is an Apple A5 Dual-Core CPU and the device will have LTE connectivity to download ebooks and content while on the go. If you are into Skype and video conferencing, you may find solace in the new 5 MP camera. Considering the small size, it has close to ten hours in battery life, which should be solid for those long reading sessions.  It is only 7.2mm thick, about 23% thinner than the 4th generation iPad. The device weighs 0.68 pounds, making it 53% lighter than its bigger brother.

Pre-orders start this Friday, with the wi-fi model shipping out on November 2nd. LTE models ship 2 weeks later in the US and Canada, then a staggered release around the world.

This is going to be a huge seller and the 7 inch segment has officially been put on notice. One of the big hyping factors is the portability factor, which instantly makes it easier to carry around than its larger screened brethren. One of the factors that will sway most people into buying this is the large amount of fully featured e-reader apps! You have the Kindle Cloud and Kobo Cloud Readers that are accessible via the Safari internet browsers. You can buy and read books directly within these apps, and if you are an Apple loyalist you can do business with iBooks.

One of the hindrances of the iPad Mini and other models is that most ebook companies no longer sell books directly anymore. This stems from Apple wanting all in-app purchases to be made via iTunes and the App Store and demanding a cut from every sale. Needless to say, a copious amount of content is sold via Amazon, Sony, Barnes and Noble, and Kobo, and all of these companies decided to negate the ability to purchase books directly in the app. This is why their cloud readers are gaining momentum.