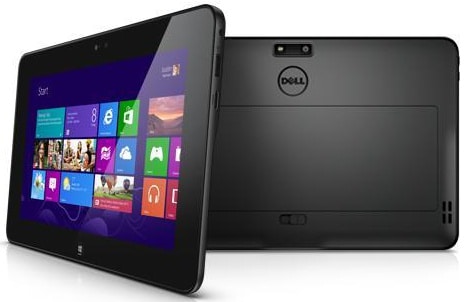 Dell’s Windows 8 offering comprises of the business oriented Latitude 10 device built around a Intel Atom Z2760 Clover Trail processor. On offer are three models each offering 2GB of RAM and 64 GB of storage. The base Wi-Fi version costs $649 while the top of the line 4G capable version costs $849. There is a $749 version in between which offers support for ethernet and comes with an optional docking station.

The new Kindle Fire HD may just be a month old, though the device has already emerged as the new chartbuster for the company. With a starting price of $199, the tablet offers stupendous value for the cost, though Amazon hasn’t made it known how many of the 7 inch tablets they have sold. Interestingly, the device’s release came just as the world was waiting for the launch of the new iPad Mini, which is expected to be a direct competitor to the Kindle Fire HD.

Meanwhile, there is a new update for the Kindle Fire’s FreeTime feature, which allows parents to exercise greater control over the way they want their kids to handle the device.

Fujitsu is readying a few tablets that would accompany the launch of the Windows 8 OS. However, while this puts the Japanese company in the same bracket as a horde of other companies, what makes the Fujitsu Stylistic Q572 unique is that it is among the first to feature the new AMD Z-60 Hondo chip. AMD is claiming it to be low on power demands while delivering superior processing capabilities.

This apart, the tablet’s spec sheet is quite impressive and includes a USB 3.0, and USB 2.0 port, HDMI, and an SDXC card slot, along with a SIM card slot, as well. The tablet offers up 4 GB of RAM and 64 GB to 256 GB of SSD storage.

The Fujitsu Stylistic QH77/J is another Windows 8 offering from the company to be launched alongside Windows 8 in Japan. The tablet comes with a keypad docking station, which means it can be transformed into a 11.6 inch notebook. Specifications are comparable, with an Intel Core i5-3427U Ivy Bridge processor at the core working in conjunction with a 4 GB RAM and a 64 GB solid state disk.

We seem to be nearing the end of one rumor story while starting off on a new exciting one. The iPad Mini is all set to be unveiled in a few hours from now, and a new image supposedly of the iPad 4 has made it online that hints at a bigger facetime camera. Apple should already have on its design of the next gen iPad, given the company’s pledge to replace the existing lineup every year. As such, the new iPad 4 should be with us during the March-April 2013 period.

It all started with an image purported to be that of iPad 4 featuring a larger lens opening on the front, which could be an indication of a bigger camera. Both iPod Touch and iPhone 5 carry a 1.2 megapixel unit at the front and the same or even better seems likely for the iPad 4. An optically-bonded display is being talked about, leading to a better quality image while reducing glare. However, a new regular sized iPad is unlikely to be unveiled at Apple’s upcoming media event, so we will have to wait until spring 2013 to get a first hand account of the new improvements.

Update: Apple surprised everyone by launching not only the iPad Mini but a new regular iPad 4 as well.

LG hasn’t had a very memorable tablet experience with the Android operating system. However, the company is betting big on the Windows 8 platform and has already unveiled a tablet running Microsoft’s next gen OS. Christened LG H160, the tablet incorporates a slide out design so that the keyboard can be slid behind the 11.6 inch display when not in use. What makes the H160 unique is that it offers an auto slide out feature, meaning the keyboard can be launched by the click of a button.

The H160 hybrid tablet offers a USB, HDMI, and a microSD card slot. The tablet is just 15.9 mm thick while weighing a shade above a kilo. LG is claiming a battery backup time of a pretty decent 10 hours. The hybrid tablet also supports LG’s Smart Touch Pen, though further details are still awaited. Microsoft is all set to launch Windows 8 on Oct 26, which is when we expect to come across more information on the LG tablet. A flurry of tablet launches are also expected during that time.

Kids flocking over to Toys “R” Us retail sites will be greeted with the Tabeo tablet, which the retail chain had first unveiled on September and is now finally ready for some prime time action. The timing of the release is perfect, what with the holiday season just round the corner. Priced at a convenient $149.99, the Tabeo might not be a trailblazer as far as performance aspects are concerned, but can hold its own among its peers.

With a 7 inch 800 x 480 pixel display upfront, the Tabeo is powered by a 1 GHz Cortex A8 processor that is supported by a 1 GB RAM along with 4 GB of internal memory. Other features of the Android tablet include a microSD card slot, a micro HDMI and micro USB 2.0 port, integrated microphone and speaker, and a front facing camera. The Tabeo is wi-fi capable and allows for seven hours of video playback. Plus, there is a wide range of accessories to be picked up as well, all priced between $5.99 and $39.99.

The Premium 10SE is the newest tablet offering from Nextbook and boasts of an extremely competitive price of just $279.99 for a tablet that offers a 9.7 inch screen. The spec sheet is quite decent, including a 1 GHz processor along with 1 GB RAM and 8 GB of internal memory. A microSD card slot allows 32 GB of max expansion and a USB port are other positives with the 10SE. The tablet running Android 4.0 Ice Cream Sandwich also comes with 25 ebooks pre-loaded into the device, which means you can get started with the device right out of the box. While the tablet can be considered quite reasonably priced, Radio Shack and Hastings have sweetened the deal further by offer a $30 discount off the MSRP.