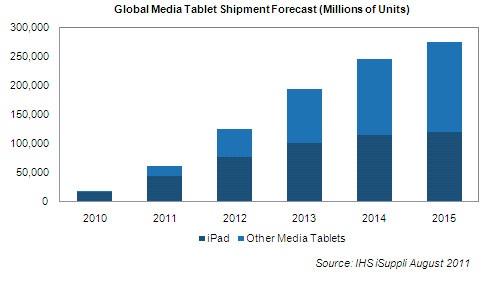 The Apple iPad, according to research firm iSuppli, has updated their tablet projections for the entire market. The report starts from 2010 and ends with speculation on how it will all look in 2015. According to the information released, Apple will continue to dominate the entire segment until 2013, while Android and other OS based devices flounder.

The Apple iPad and iPad 2 are projected to ship over 44 million devices this year. This accounts for over 74% of the entire tablet field in sales. By 2015, the company should continue to deliver quality products that people lap up, owning 43% of the market.

“All the momentum in the media tablet market is with Apple right now,” said Rhoda Alexander, senior manager, tablet and monitor research for IHS. “The competition can’t seem to field a product with the right combination of hardware, marketing, applications and content to match up with the iPad. Furthermore, Apple’s patent litigation is serving to slow or complicate competitors’ entry into some key regional markets. With Apple lapping its competitors, many of whom are still struggling to get out of the starting gate, this remains a one-horse race.”

HP, with its seven week old TouchPad, could not compete with the insatiable appetite for Apple based tablets. We have been covering the entire saga of HP and its resulting firesale to get rid of its tablet division. Acer is also scaling back tablet production and dumping stock in Europe due to lacklustre demand. The CEO of the company has publicly stated many times that he sees the entire tablet market to be nothing more than a flash in the pan.

Android still accounts for the largest alternative to the iOS based tablets, while RIM and MS account for under 8% total.