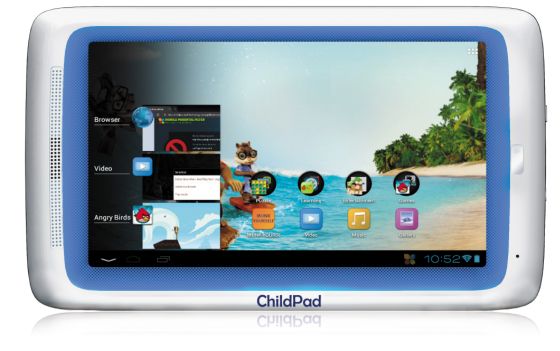 Archos has built a reputation of developing relatively cheap tablet devices while offering decent levels of performance. This time, the French manufacturer is out to woo the kid community with a tablet built specifically for them. Appropriately named ChildPad, the tablet which was first revealed in March is now on sale for a nice $129.99.

While the price is definitely likeable, the specs aren’t too disappointing either. At the heart of the tablet lies a 1 GHz ARM Cortex A8 CPU that is assisted by a 1GB RAM. On-board storage stands at 4 GB with microSD card support to add more when needed. Also, the tablet runs the latest Google Android 4.0 Ice Cream Sandwich.

The ChildPad connects to the internet via 80.211n Wi-Fi and boasts of a front facing camera. The tablet is also capable of playing back 1080p HD video. Measuring 8.8 x 5.6 x 0.5 inches and weighing just 0.8 pounds, the tablet will also be easy to hold and operate by the kids.

As for content, Archos has made sure there be no dearth of kid friendly apps on the ChildPad. The tablet already boasts of exclusive availability of Alvin & The Chipmunks 3 content which includes video clips, pictures, wallpapers, as well as an online game. The Android ICS version too has been worked upon considering the tablet is to be used by the kids while parental control has been enabled via Mobile Parental Filter” by Editions Profil with the service coming free for the first six months. So while the web browsers have enough firewalls built into them to ensure the young users only get to see what is deemed suitable for them, access to Google Play Store has been cut off. Instead, what is available is the AppsLib app store which again has barriers built into them.

The only drawback is that the resolution is a woeful  800 x 480 and the screen is resistive touchscreen. Although kids may not complain because this is their first tablet and may not know any better.