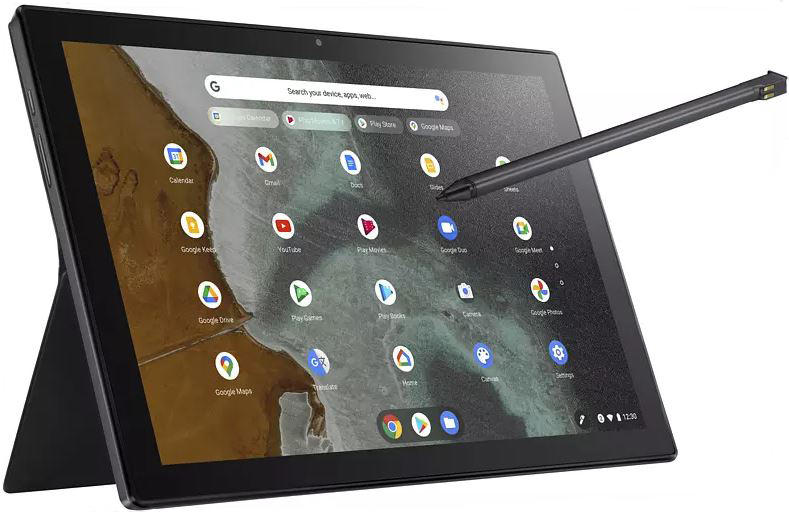 Not many might be aware, but there does exist a segment comprising of Chromebook tablets. However, one likely reason the segment isn’t too popular is that it has just the Lenovo Chromebook Duet as sort of its flag-bearer. However, what seems likely is that the Lenovo Duet will soon have company in the form of the Asus Chromebook Flip CM3000.

Strangely, Asus isn’t going to town trumpeting the launch of its latest hardware running the Chrome OS. It didn’t even announce the tablet during the CES event held a couple of weeks back. Instead, the tablet has been found listed on the German retail site Saturn, which also provides us with a fair bit of information about the device as well.

For instance, from what is apparent is that the CM3000 will come with a 10.5-inch display having a resolution of 1920 x 1200 pixels. The display offers a 16:10 aspect ratio and 320 nits of peak brightness. That makes for mixed results compared to the Chromebook Duet, given the latter’s slightly smaller 10.1-inch display.

However, since both the tablets have the same resolution, the same on the CM3000’s larger display leads to a slightly lesser pixel density even though the changes will be too negligible to perceive with the naked eye. The same applies to peak brightness where the Lenovo Duet scores with its 400 nits rating.

Otherwise, the CM3000 is built around the MediaTek MT8183 chipset and is coupled to 4GB of RAM and 64GB of eMMC storage. For power, there is a 27 Wh battery on board and comes with a detachable keyboard. The keyboard again has a soft-touch fabric layer on top and gets attached to the tablet via magnetic action. That, along with the rear kickstand, does remind us of the Microsoft Surface range of convertible devices. You can do most of the things with this device, as you would with all others.

The SM3000, meanwhile, also packs in an 8 MP rear camera while the front gets a 2 MP camera. The tablet supports 802.11ac and Bluetooth 4.2, while there also is a 3.5 mm headphone jack as well. The tablet also supports the USI stylus though that has to be bought extra. The SM3000 tablet, otherwise, will set you back 449 euros.

However, before anyone gets too excited, let’s wait for official confirmation from Asus on this.