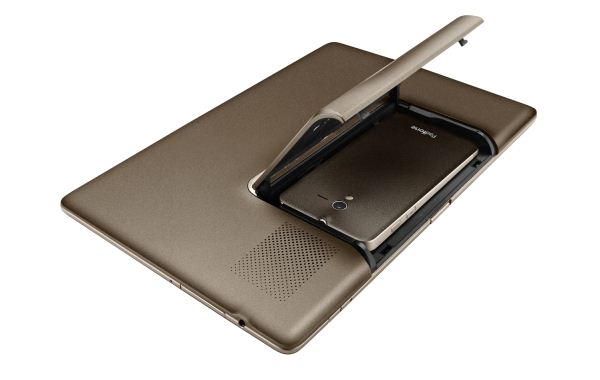 The Asus PadFone was one of the more outrageous tablet concepts of Computex 2011. Now that we are just past this year’s edition of the premier tech show in Taiwan, the PadFone is finally ready to be seen on store shelves in the US.

Essentially a smartphone that powers a tablet, which in turn also provides the phone with a charging station, the PadFone though won’t come cheap at $859.50. However, the price is inclusive of a smartphone that boasts of a 4.3 inch Super AMOLED qHD display and is powered by Snapdragon S4 with the new Adreno 225 GPU. Running the entire show will be the latest Android 4.0 ICS. The tablet part, or to be technically correct, the PadFone Station comes with a 10.1 inch capacitive touchscreen having a resolution of 1280 x 800 pixels.

Also, the PadFone, made available in the US by Negri Electronics, happens to be the international imported version. What this means is that the price in the end can be much higher. Also, specifications for the PadFone can’t exactly be termed ground breaking though the form factor sure is. The unusual form is the biggest USP of the device and if that is tempting enough, well you know where to go to get one.