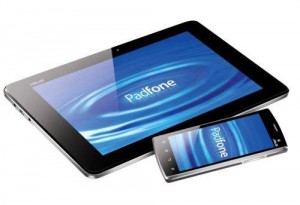 A combination of a tablet and a smartphone is what one gets with the Asus Padfone. The phone which is the basic building element of the device has a 4.3 inch display of its own and a docking station into which the tablet is fixed which in turn provides a larger display of 10 inch. Naturally, it’s a more exciting experience that one gets while using this device for web surfing, gaming or even watching video.

However, while the Padfone is exciting for sure, what we have known so far is that the tablet will be made available towards the first half of 2012. Digitimes though has more accurate information in that the Padfone is expected to be available in the market in February 2012. The OS has also been wisely selected to be the latest Android 4.0 Ice Cream Sandwich, as this version runs both on a phone as well as a tablet device giving the user a similar experience on both the gadgets.

Digitimes also reports of a smaller version of the Eee Pad Transformer being thought of right now which, if it fructifies, will debut in the market early next year. In fact, Asus has a number of tablet launches lined up next year. The Transformer currently is available only with the screen size option of 10 inches. However, a 7 inch sized Transformer might not be able to do justice to its naming as it will be too small to have a suitable keyboard docking into it. Such a keyboard would not be comfortable for use in the conventional sense but might prove effective for thumb typing.

However, all of these are mere speculation as of now. There is a fair chance that Asus may finally come out with tablet that has a 7 inch screen but without the provision of attaching a keyboard to it. The Consumer Electronics Show to be held in January 2012 would sure indicate what is finally going to be available in the market for times to come.