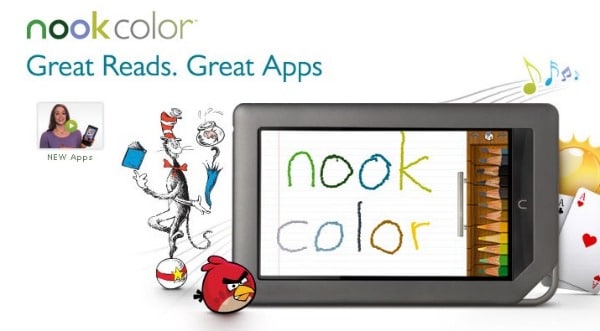 Barnes and Noble was serious about its UK expansion when various sources within the company tipped their hand on their first market outside of the USA. Starting March 19th in London, B&N will try and woo local developers to port and submit their Android apps to the Nook Developer Program.

B&N is planning on introducing their Nook Developer program in the UK where users of the Nook Tablet and Nook Color can download officially sanctioned applications right to their device. The company intends on trying to port over as many local apps as possible to give UK users a distinctive experience. This is no word yet on when the Nook line of devices launch in the UK later this year or if their app store selection will be different than their American counterparts.

If you are interested in registering for the event and checking it out you can visit the link HERE.

[showhide type=’pressrelease’]A year ago, more or less, our event on tablets looked forward to emerging trends and exciting possibilities. Here we are a year later, and with many thanks to our kind sponsors Barnes and Noble we get the opportunity to look back on what was thought to be coming then and see what’s coming next. Not only that, but there will be a NOOK developer workshop in the late afternoon, before the evening event – see below for details.

It’s a timely moment to look at the market given Wednesday’s much heralded “expected announcement” and the recent triumph of Morris Lessmore at the Oscars. With 73 million tablet devices sold in 2011, this means that tablets accounted for around 25% of mobile PC shipments last year. Although this was still still dominated by iPad a lot of the excitement and commentary seem to be around the Kindle and the Nook – combining as they do a content ecosystem with the delivery of that content.

So our focus for the evening will be to ask what kinds of content are especially suitable for the tablet format – are we really seeing a significant emergence of tablet only content? For a start the tablet offers the opportunity for multi-person interaction in a way that a mobile phone doesn’t. What are the other distinguishing properties? With all kinds of applications and all kinds of interaction possibilities, what is the right mix for any particular content type? What kinds of skills are needed for content creation?

And talking of content creation, last year we talked about using the tablet as a platform for content creation in its own right – where has that story got to today? It’s said that there’s a female skew in tablet app purchase and in follow-on sales – is this right, what are the demographics?

The ever important question, of course, is who is making money out of this and who will make money going forward? App creators have been known to express some scepticism about how satisfactory the returns are. Is this like mobile phone apps with only very small numbers of developers making a viable return? Check out the NOOK Developer Workshop announcement below for some apparently quite compelling figures. But let’s find out, in short, how much money is there to be made?

To help us make sense of all this, Marek Pawlowski will chair the panel. Marek is extremely well known for the highly regarded and thought provoking MEX mobile user experience series of conferences and his mobile industry consultancy.

Joining Marek on the panel will be:

Other panellists will be announced shortly[/showhide]