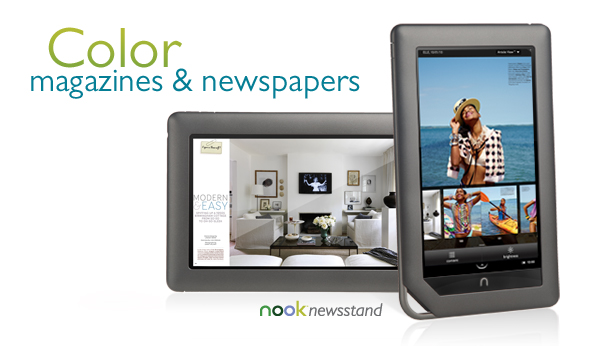 The Barnes and Noble Nook line of electronic readers has certainly saved USA retail giant Barnes and Noble bookstore chain from certain doom, when last year things looked grim. E-Reader and eBook sales has been the saving grace of the company and it looks like figures released for the last 2 months in NOOKnewstand sales is over half a million with 650,0000 newspapers and magazines sold.

The Barnes and Noble Nook Color is a runaway success for the company, whom was manufacturing 3 million a month to keep up with retail demand going into the holiday season. The Nook Color is the primary e-reader that gets to browse the full color magazine and newspaper content via their NOOKnewstand.

Barnes and Noble did release information on the top besellers, for magazines they include; Us Weekly, Cosmopolitan, National Geographic, Reader’s Digest, Maxim, Star, O, the Oprah Magazine, Food Network Magazine, Women’s Health and Shape. The top newspapers include USA TODAY, The New York Times, and the Wall Street Journal.

In a recent Press Release from Barnes and Noble they had the following to say; “We are excited to offer a wide array of top periodicals and have seen explosive growth in NOOKnewsstand sales since the launch of NOOKcolor. Our customers clearly enjoy reading digital versions of their favorite magazines in rich, beautiful color, along with their daily newspapers, with the convenience of subscription or single issue purchases,” said Jonathan Shar, Vice President and General Manager of digital newsstand at Barnes & Noble. “We’ve had overwhelmingly positive feedback from our content partners as well and will continue to build upon our vast collection of periodicals and incorporate even more interactivity for NOOKcolor customers this year.”

It certainly looks like Barnes and Noble struck gold with the Nook Color, it may not be an e-ink electronic reader, but an android tablet. What it does have, is access to a ton of premium content tailored towards a rich color experience, something most of its competition is not giving its customers.