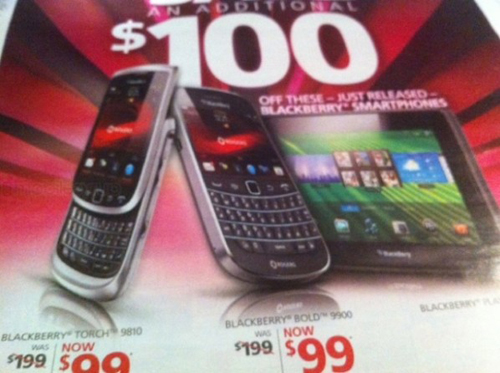 It is turning out to be a season of discounts, promos, and offers, starting with HP with its $99 TouchPads. Here is the latest and it’s coming from another company that is having a hard time finding enough buyers for its tablet—the PlayBook from RIM. It goes like this, if one were to buy a BlackBerry Bold9900 or Torch 9810 along with a BlackBerry Playbook tablet, the buyers qualify for a $100 rebate on the purchase. The offer comes from Rogers as they try to provide RIM with a much needed lift in the process. The offer will be starting on Thursday for the month of September and requires a new three year contract with the provider.

The price at which Rogers is currently selling the smartphones is $199 and the PlayBook for $500. With the combo offer, the effective price of the smartphone comes down to $99 each.

The Bold9900 boasts of features that have been regular features of all traditional RIM hardware—a hardware QWERTY keyboard alongside a 2.8-inch, 640 x 480 touch screen with a 1.2 GHz Snapdragon processor on the other side of it. The smartphone was launched just earlier in the month and is the first smartphone that is shipping with the BlackBerry 7 OS.

A few days after the launch of the Bold, there was the slider torch that hit the Canadian market. This one comes with 3.25 inch 640 x 480 touch screen display, a 1.2 GHz processor, and 720p video recording capability while the Torch is based on the BlackBerry 7 OS as its Bold cousin.