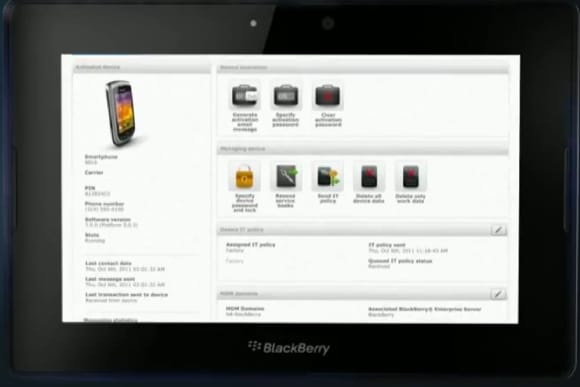 The BlackBerry Mobile Fusion that RIM announced back in November 2010 is now ready for action. The tool allows you to effectively manage not only the BlackBerry smartphones, but also those running Android or iOS. Employees tend to prefer to bring their own devices to work, and switching between operating systems can be a nightmare for business administrators. With the BlackBerry Mobile Fusion software, businesses can extend the superior data control and security features that have been the hallmark of Blackberry devices to other smartphones or tablets as well.

As for its security and data control aspects, Mobile Fusion features 256 bit encryption, and OTS app installation ability which is used for the BlackBerry phones or the PlayBook. Mobile Fusio also has support for BlackBerry Balance due to the software’s integration with BlackBerry Exchange Server.

Using the software is easy as it presents a single, simple interface that allows its user to interact with various BlackBerry 7 devices, the PlayBook tablet, or other devices running Android or iOS. Tweaking the configuration settings of the connected devices would be simple work for the administrator. Also, even though it isn’t being mentioned, the Mobile Fusion platform is believed to be the outcome of the data management company named Ubitexx that RIM acquired in May 2010.

Mobile Fusion is available for download and costs nothing, though RIM is charging for using the software. Charges would depend on the number of networked devices to be handled. There is a 60 day trial offer given by RIM as of now and the charges thereafter is $99 per user termed as Client Access License charges or $4 per month for every user to be billed annually.