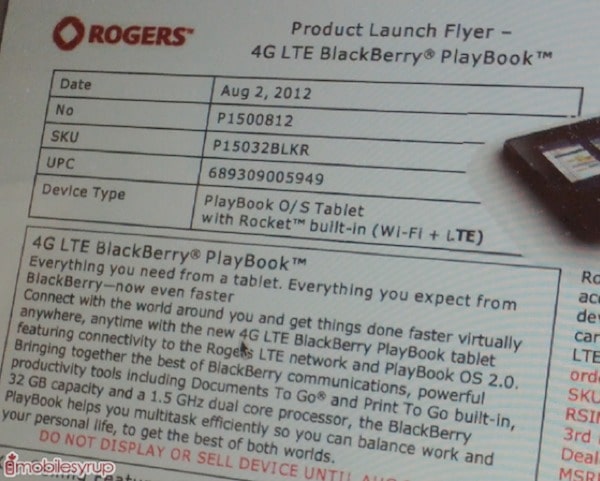 After almost two years, Research in Motion is releasing a successor to the Playbook. This new iteration has a 1.5 GHZ processor and 32 GB of internal memory. It features a 7-inch 1024 x 600 pixel touchscreen, 1GB of RAM, and the same 3-megapixel front camera and 5-megapixel rear camera. The big selling factor on this new edition is the fact it can tap into new LTE networks by Rogers, Bell, and Telus. Today, the pricing has been revealed and the products are available starting August 9th.

The 4G LTE BlackBerry PlayBook will be $549.99 no-term, $499.99 1-year, $449.99 2-year, and $349.99 on a 3-year term. Carrier prices will not vary much during the launch period and you will have to pay an additional fee for LTE internet access. This unit will use a new Micro SIM, so you will not be able to use your current Blackberry SIM card to gain internet access. Rogers and the other Canadian companies often charge close to $50.00 a month just for LTE data access.

This might be a hefty investment for the average customer to pick up, but I do see some benefits. You will be able to read your emails and news while on the go, something the previous model would not allow you to do. It also will launch with a higher version of Adobe Air and Adobe Flash, so your Android apps will be quicker to load.

At almost $500.00 as an entry level price, the market strategists at RIM have their work cut out for them.  Many people gravitated to the Playbook when the price was slashed to $199.99 over the course of the last year. The current pricing levels might be a barrier to many people, because you can get an iPad for the same price.

Finally, according to fellow Canadian tech blog Mobilesyrup, Employees have strict orders about this launch, specifically noting that they “DO NOT DISPLAY OR SELL DEVICE UNTIL AUG 9, 2012.”