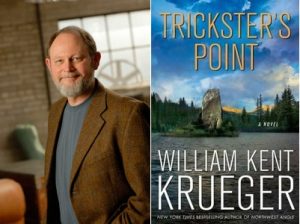 I don’t really like mysteries. Basically, I just never care whodunit and even if it was the butler, I can’t really figure out why he did it.

Fortunately, Krueger is such a masterful storyteller that he made me care. You can’t not care, especially when a beloved political figure is lying on the ground, gasping for breath with his best friend’s arrow sticking out of his chest. And there’s a really complex reason why this best friend sat beside the dying man for three hours without going to get help.

As with any good suspenseful story, the reader has about twelve different options for the would-be killer and just when he thinks he knows who it is, a new name gets dragged into the unfolding plot. Krueger keeps it hidden until the very end.

Trickster’s Point, the twelfth book in the NYT bestselling Cork O’Connor mysteries, incorporates a setting woven throughout with Native American history and provides a realistic insight into modern-day life on and around the reservation, complete with the good and bad. Set against a backdrop that shows some of the initiatives that have built up the Ojibwe identity alongside some of the struggles that continue to plague the people, the Native identity appears to be a living, breathing character in the story every bit as real as the key players. This phantom character may have played just as big a part in the murder as the one who drew the bow.