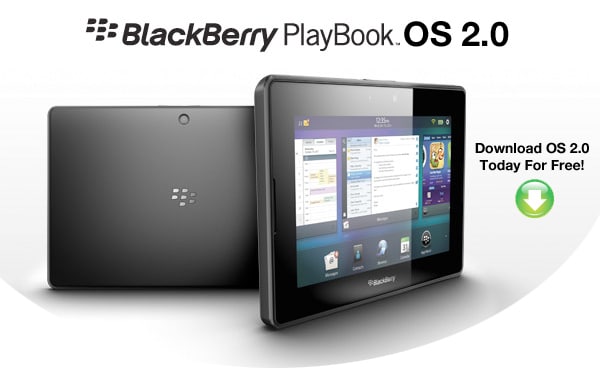 The Blackberry Playbook is finally relevant again with a major software upgrade that spent almost a year in development. The new OS2 update is available in your settings menu where you select “update.” It will give you some amazing new features that will give you the quintessential RIM experience.

The new OS2 update gives users something everyone has wanted from day one and never received. The dedicated e-mail, calender, and contacts listing is the most prevalent addition that everyone will use on a daily basis. In the past you had to have a Blackberry Smartphone and the Bridge software that ported emails and everything else directly from your phone.

There are also new social elements that give you direct feeds to  your email via Twitter, Facebook, and LinkedIn. Fancy yourself a reader? There is now an Amazon Kindle App for the Playbook so you can finally get a solid reading solution to buying and reading books. This is great because most  users had to rely on Kobo exclusively to get their content, and now there is some competition.

One of the most important elements to this update is the ability to use Android applications on your Playbook. Behind the scenes in the firmware is a Android Player that will give you access to tons of new apps. Speaking of apps, make sure to check out the revised Appworld for plenty of new programs, games, and productivity.  The most exciting thing for me is how easy the process is for existing Android apps to be converted over to the RIM format, so you can expect a massive influx for new content soon.

This OS2 update really is what the Playbook needed from day one and never received until a year after the release. Hardware wise it gives you a great dual core processor and you can multitask with impunity. The HDMI out is something most other mainstream tablets lack and is a deal breaker with most business people who need it for presentations or for average users who want to stream videos to their television. Speaking of TV, you can use your Blackberry Phone as a remote for your Playbook, so if its connected via HDMI to your television set. You can actually control your tablet with your phone!

Stay tuned for our full hands-on video later on today where we walk you though all of the new features found in the OS2 update! For Canadians, you can buy the Playbook 16 GB model for a cool $199 at Futureshop and Best Buy.

Update: Many people are asking about the Android Apps in the revised Blackberry App World. There is no specific category to find Android apps, they are mixed in with all of the other apps. The Kindle App was removed quickly after hitting the market due to bugs. We are working on a Playbook Section in our own Good e-Reader Android App Store and will offer tips/tutorials on how to easily load them on your Playbook.

• Integrated email client with a powerful unified inbox: With BlackBerry PlayBook OS 2.0 you have the option to use a unified inbox that consolidates all messages in one place, including messages from Facebook®, LinkedIn® and Twitter®, as well as personal and work email accounts.

• Social Integration with Calendar and Contacts apps: The built-in calendar harnesses information from social networks and makes it available where and when users need it. Contact cards are also dynamically populated with updated information from Facebook, Twitter, and LinkedIn to create a consolidated view of contacts.

• Improved mobile productivity: Updated document editing functions, the new Print To Go app, and increased control and manageability of corporate data with BlackBerry® Balance ™ allow you to get more out of your BlackBerry PlayBook every day. Plus, an updated virtual keyboard with auto correction and predictive next word completion learns how you type to enable faster, more accurate typing.

• New apps and content: Thousands of new apps are being added to BlackBerry App World™ today (including a range of Android® apps that will run on the BlackBerry PlayBook). A new BlackBerry Video Store1 is launching today. Enhanced web browsing capabilities are also available with BlackBerry PlayBook OS 2.0.