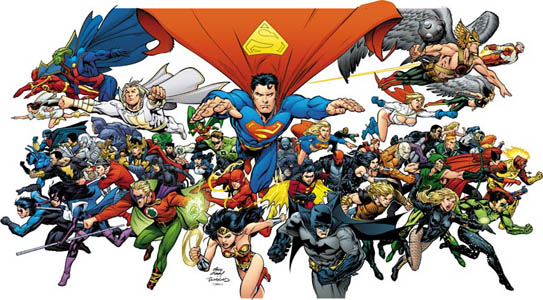 GoodEReader.com posted an article in April 2011 that explained the frustration that graphic novelists and their audiences feel with digital self-publishing, specifically a lack of e-titles compared to the fiction market and difficulty in trying to self-publish comics and graphic novels to tablets and e-readers. However, a remedy may be just around the corner.

The comic book fan sites are on fire with the news that DC Comics, the longtime masterminds behind the Justice League superheroes such as Superman, Batman, Green Lantern, Wonder Woman, and more, will be re-releasing 52 of its original titles as early as August 31st. While this wouldn’t be newsworthy to die-hard lifelong fans of the genre’s print form, DC Comics hopes to reinvigorate its stagnant comic books sales by introducing first-time comic readers to the original story lines, many of which have grown so complex and convoluted over the years that jumping in midstream is nearly impossible.

But the comics giant hasn’t left its original fans empty handed. The re-release of these original books holds some key characteristics that even avid collectors will appreciate. New twists and turns in the original storylines will give Justice League gurus even more in-depth glimpses at what motivated these superheroes to join forces in the first place, while updated styling on the attire and physical characteristics will generate new interest and appreciation for these iconic figures.

So what does that mean for the digital publishing age? DC Comics’ huge announcement wasn’t so much the relaunch of the series beginning with Justice League Number 1, but of its new decision to incorporate day-and-date digital publishing with that issue. For those uninitiated in the world of comic books, this means that the day a book hits the stands in retail markets, the digital version will be available on the electronic devices at the same time.

That’s still not surprising to those who aren’t schooled in the ways of the comic book market, because most fiction readers are used to enjoying the ability to buy digital copies of bestselling fiction titles as soon as they are released, or at least very soon afterward. But any avid comic fan knows this is a really big deal.

Typically, digital versions of many comic books were relegated to older backlist titles or lesser popular characters and storylines, a way to try to boost interest in flailing issues or outdated themes. The ability to download a full-color comic book on the day of its release will mean greater access by a wider fan base, as well as meeting the digital needs and purchasing habits of the newer generation of comic book fans.One of the stumbling blocks to the popularity of digital comics has been price: a typical decades-old issue of a comic book, available on the comiXology app for iOS, will run the reader an average of about two dollars, while the cost of a new, print issue of a comic can easily cost twice that much. With the subtraction of the printing and shipping costs, it will be interesting to see if the price of the renumbered Justice League digital versions is still as high as its print counterparts.

Hopefully, as market watchers keep a close eye on the success of DC’s new venture, a greater appreciation for the digital comics and graphic novel readers will ensue. With a comic mogul like DC paving the way, greater access to graphic titles should hopefully hit the digital market soon.