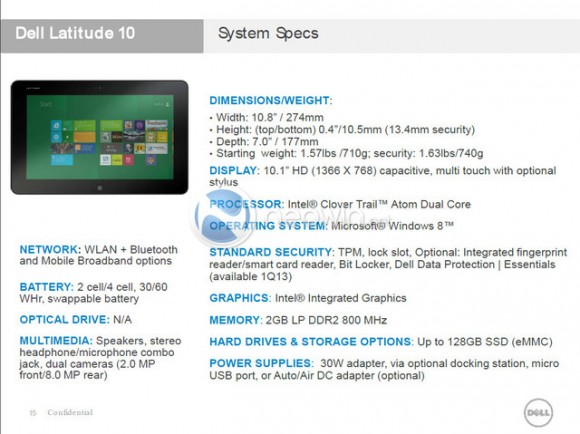 When Dell CEO Micheal Dell recently revealed they would be in the position to launch a tablet running Windows 8 as soon as Microsoft launches the OS. Things are painfully clear that Dell is already in advanced stages with the tablet’s development, though details of the upcoming tablet has been kept under wraps so far.

That has changed with the recent leak by Neowin of the Dell Latitude 10 tablet running Windows 8 OS. There isn’t any surprises though in the spec sheet, which speak of an Intel Atom Clover Trail processor, 2 GB of DDR2 800MHz RAM, and up to 128 GB of SSD. The front is dominated by the 10.1 inch capacitive multi touch display having a resolution of 1366 x 768 pixel. A 2 and 8 megapixel webcam are included in the front and rear of the tablet that also boasts of an audio in and out port as well as an integrated fingerprint scanner.

Connectivity options include bluetooth, Wi-Fi along with mobile broadband options. The tablet measures 10.8 x 7 x 0.4 inches and weigh about 1.6 pounds. The tablet will be available with a 2 cell 30Whr or 4 cell 60 Whr user removable battery options with backup times of 8 and 12 hours. Low battery life has been the bane of all Windows tablet we have seen so far and the improvement is a huge welcome step.

However, Dell’s Latitude range being typically comprised of business oriented devices, its likely the Latitude 10 discussed here might also be for the enterprise segment. Still, a nice aspect with the tablet is that it being based on the x86 processor, running legacy Windows applications on the tablet won’t be a problem. Also, with the tablet being compliant with new Metro style features, it will also be able to run two Metro style apps on the same screen and at the same time.

Meanwhile, the Neowin leak also mention of a convertible tablet named XPS 12. The convertible with a 12.5 inch display would be launched in late 2012 and is much on the lines of the Inspirion Duo that Dell had launched last year.

One of the great aspects of the Windows 8 line of tablets is showcasing the new Microsoft investment in Barnes and Noble. This will provide deep integration of the Nook eReading software and allow people worldwide to tap into an expansive ecosystem to download tons of books.