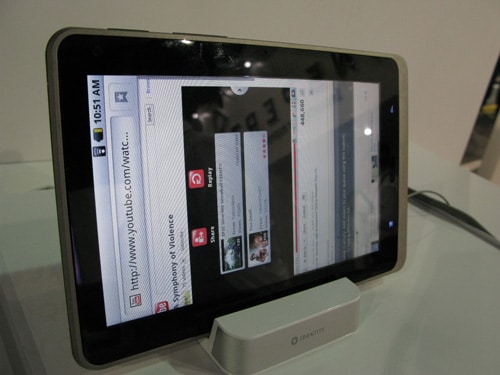 Good news for those who are looking for a budget tablet and won’t mind hanging around with Android 2.2 Froyo. This notwithstanding the fact that the world has moved on to Android 2.3 and its the tablet specific version of Android, Honeycomb, that is being awaited next week.

While the Enspert 201U tablet from Dynamism does not come packed with some of the most interesting bits and pieces of technology, it does have a Cortex A8 processor running at 1 GHz and a PowerVR SGX 450 GPU making up the core of the tablet. The 7 inch capacitive touchscreen however isn’t the liveliest around with just 800 x 480 pixel resolution, though the version that was showcased at the CES – Enspert E301 – was more life-like with a 1024 x 600 pixel display.

There are a few other things that puts the Enspert E201U in a positive light. The tablet comes equipped with features such as front and rear facing cameras, USB and HDMI ports, a SD card slot along with 802.11n Wi-Fi and Bluetooth connectivity options. There is no word though of 3G at the moment.

The biggest positive in favor of the Enspert E201U, apart from its price tag of $349, is that the tablet enjoys access to the Android Market, something that many tablets cannot of boast. The overall built quality of the tablet is also surprisingly good.

So if all of the above seems tempting enough, well Dynamism is currently accepting pre-orders for the tablet with the shipment of the first batch slated to arrive on the 15th of February.