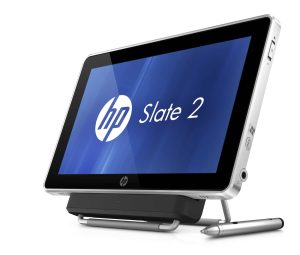 While the HP Slate tablet device may have missed out on the popularity that its Android running stablemate — the TouchPad has garnered in its extremely short life span, that the tablet continues to live has been made evident by the unveiling of a next gen version of it. Also, as it is with all the next gen versions, HP has tried its best to revive interest in the Slate that many surely might have even missed out if its at all exists.

So its now the 1.5 GHz Intel Atom Z670 Oak Trail processor that is at the heart of it all which will definitely bump up battery usage to about 6 hours, which is respectable for a tablet running Windows 7. Another notable feature of the new Slate 2 is the incorporation of a Trusted Platform Module or TPM embedded security chip 1.2 that ensures data stored in the tablet is that much more safe than anywhere else.

The Slate 2 though continues to sport the same looks as it predecessor with 8.9 inch touchscreen display with 1024 x 600 resolutions. It would have both the N-Trig digitizer as well as a stylus while for connecting to other devices, the Slate 2 includes an USB 2.0 port. Another nice aspect of the Slate 2 is the SD Card slot that let’s users to add more memory than the default 32 and 64 GB storage options. The device would be having both front and rear facing camera along with a speaker and a mic for recording. The operating system is of course Windows 7 Professional. However, all of these has resulted in the Slate 2 to be slightly beefy at 1.52 pounds while sorting dimensions of 5.9 x 9.21 x 0.61 inches.

The device has one other unique feature in that it comes with a Swype keyboard which makes it the first of its kind to come with this accessory. What makes the keyboard distinct is the way it allows one to use the finger to slide over it for the next key selection without physically lifting it from the keyboard. The Swype keyboard will perhaps be a much better technology to be used on smartphones given their smaller size of display screen though to have a feel of this new technology on a tablet device will be worth waiting for.

In any case, what will be interesting to see if whether a change of its internals goes on to change its fortune too when it starts hitting stores later this month. HP is doing better this time by targeting the Slate 2 for use in business, education or the healthcare industry. The company is promoting the tablet as a device that is adept to even heavy computing tasks and not just surf the web, or watch movies and play games. It has even reduced the price tag from the earlier $799 to $699. Also, the Slate 2 is as far off from the iPad as chalk is from cheese though the best thing is, neither HP nor Microsoft is promoting the device as an iPad killer this time. Better still, Steve Ballmer is nowhere to be seen with the Slate 2, a stark contrast to the days when he made his presence felt in almost every major event in 2010 with the Slate trying to drive home the point that Windows 7 is also a key player in the tablet segment. Everyone knows what followed later though the Slate 2 has it all to make it big this time.

via extremetech, via pcworld