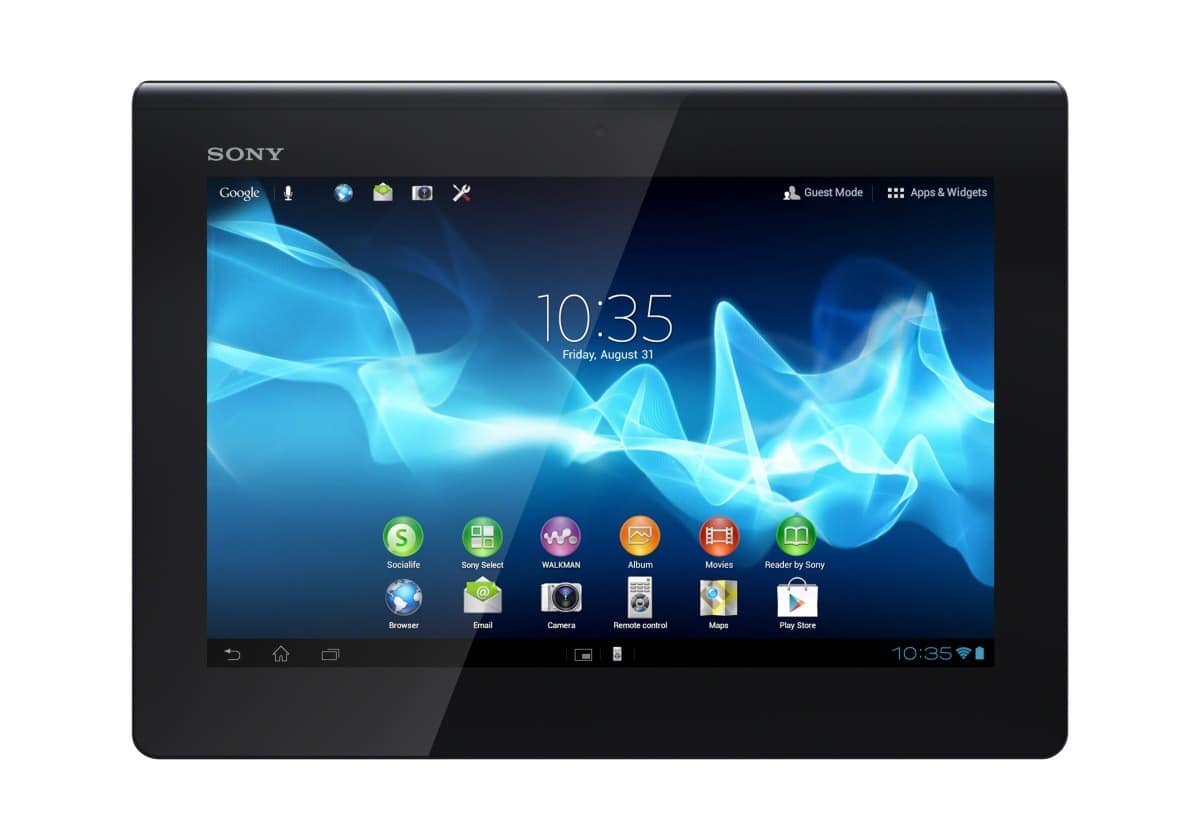 Finally the Xperia Tablet that we knew has been cooking in the Sony camp for the past few weeks has arrived. The tablet, which will be a step above the Tablet S, comes with the usual dose of specification enhancement along with a better feature set. Named Xperia Tablet S, the tablet (as expected) is powered by the Nvidia Tegra 3 quad core ship and runs Android 4.0.3 ICS. The 9.4 inch HD display boasts of OptiContrast Panel with low friction coating and a resolution of 1280 x 800 pixels. Providing the juice is a 6,000mAh battery that Sony claims is good for 10 hours of runtime.

The tablet is done up in a new aluminum body that is thinner and lighter than its predecessor and boasts of a splash proof design. The tablet also comes with some cool features, such as an infra red emitter which can be used to control other devices. Further, the Xperia Tablet S betters the microSD card slot found on most tablet devices with a full sized SD card slot. There are some nice accessories made available as well, which includes a Microsoft Surface-like keypad that doubles up as a tablet cover.

The OS has been worked upon as well, and now includes some nice enhancements such as the Guest Mode which restricts access to some of the apps when logged in. The feature is akin to the Guest Account found in Windows. Music and Video Unlimited is also part of the package that will let you source your song and video requirements from Sony’s vast repertoire. Sony has also promised an upgrade to Jelly Bean soon.

The Xperia Tablet S would be up for sale starting September 7. The pricing has been kept simple, $400, $500, and $600 for memory size options of 16, 32, and 64 GB, while the Surface-like keypad cover will retail for an extra $100. Plus there are other accessories like a docking station and such.

You can expect high availability when this tablet officially comes out. Sony is throwing all its might behind it and you should be able to purchase it from Best Buy, Future Shop, and many other major retailers.

[showhide type=’pressrelease’]Control the Living Room With the New Xperia™ Tablet S
The Android™-powered device features a universal remote control with macro functionality, a variety of original applications and a more immersive entertainment experience

SAN DIEGO, August 29, 2012 (7:45 AM PST) – Sony announced today the launch of the Xperia Tablet S, a thin and light device packed with original applications and Sony exclusive features. The new device joins Sony’s smartphones under the Xperia sub-brand. The Xperia brand delivers mobile experiences that enhance user enjoyment through design and network services. By introducing a tablet under the Xperia brand, Sony offers users a consistent experience between the immediate convenience of an Xperia Smartphone and an immersive entertainment experience of an Xperia Tablet. Common user experience across the devices further enhances overall usability and intuitiveness. Combining optimally designed hardware and software, Xperia Tablet provides consumers with a compelling way to play, watch, listen, share, discover and connect.

CONTROL THE LIVING ROOM
Building on the popularity of the universal remote control feature in the previous model, the Xperia Tablet S has enhanced this feature by adding macro functionality, allowing the ability to turn on multiple devices of most brands, including TV, Blu-ray Disc™ player and audio system, with the touch of one button. Consumers can easily program sequenced commands such as “Watch TV” or Play Music” and perform the sequences with one tap on the screen.

To further enhance the living room experience, Sony will offer a new app called Watch Now, which enriches the TV watching experience. Watch Now provides an interactive, visual program guide fueled by personal preference and real-time trends from users’ social media feeds. TV fans can use the app to discover new shows based on intelligent recommendations from the app, change the channel with a flick of the finger and share their thoughts on what they are watching via Twitter™, Facebook® and Get Glue. The Sony exclusive app will be available for download for the Xperia Tablet S in the US from Google Play™ at launch.

“We know that eighty-eight percent of tablet owners in the US are using their tablets in the living room,¹ and are multi-tasking with their tablets while watching TV,” said Phil Lubell, vice president of networked technologies and services at Sony Electronics. “We wanted to enhance that living room experience by providing interactive and useful features with the Xperia Tablet S.”

BEYOND THE LIVING ROOM
Not only will Xperia Tablet S owners be able to control their living room, but they can also control content on the device for various other people using Sony’s new exclusive Guest Mode feature. Guest Mode allows for personalized configurations for different users by displaying different wallpaper, applications and widgets. The tablet owner can manage access for any friend or family member by regulating which apps and widgets are accessible by others. Guest Mode can provide parents with a strong parental control tool by offering more supervision over what content their children can consume.

“Tablets are no longer just a personal device, but are being shared by family members, and we heard from consumers that they wanted to have parental controls. It was important for us to provide parents with a solution for controlling what content their children could access from the tablet,” Lubell added.

Xperia Tablet’s splash proof design helps provide assurance that the tablet is protected from the elements. With an IPX-4 splash proof rating, the Xperia Tablet S can withstand splashing water at all angles when the multi-port cover is in place. Even with wet hands the LCD screen will still recognize touch gestures, making the device a perfect companion in the kitchen and beyond.

SONY APPS
Preloaded onto the device are the Sony Entertainment Network Services, giving consumers access to their favorite songs, movies and TV shows with a single sign on:

– Purchase or rent on-demand hit movies and TV shows anytime you want with Video Unlimited.
– Discover and listen to millions of songs from all your favorite artists with a Music Unlimited subscription, now with the ability to cache playlists for offline listening.
– Store your photos and videos in the cloud and share on any device at any time with friends through PlayMemories Online™ service.

Book lovers can also purchase and read their favorite eBooks with the pre-loaded Reader™ application and manage their bookshelf across multiple devices, including Sony Reader and Xperia Smartphones. This fall, Sony Xperia Tablet S owners will also be able to enjoy dedicated content from PlayStation®Mobile on their tablets.

Small Apps allow tablet owners to truly multi-task by using a minimized version of the browser, calculator, remote control, recorder, timer, memo or scrapbook simultaneously while using another application. Any widgets downloaded to the device can also be added to the Small Apps.

Scrapbook, a new app available at launch, allows users to clip from websites, services or apps to create their own scrapbooks. Users can then share clips or scrapbooks as images across multiple apps. Users can download Socialife, a fun, stylish viewer to manage your social networking sites and news feeds in one place. Lastly, Sony offers three media applications, WALKMAN®, Album and Movies, allowing users to consume their content in feature rich and easy-to-use apps.

SPECIFICATIONS
The Xperia Tablet S, which launches with Android 4.0, has a thin and light aluminum body while still maintaining a unique design for a comfortable grip and feel. It is fast and powerful with a NVIDIA® Tegra™ 3 quad-core processor. The screen maintains a crisp display and fingerprint and glare reducing coatings. The device includes a full-sized SD card slot for expanded storage and HDMI® connectivity with optional HDMI adapter cable. With built-in Wi-Fi® compatibility, users can browse the internet, check e-mail and access digital content anywhere there is a Wi-Fi connection.

Sound quality is enhanced with ClearAudio+ mode. ClearAudio+ mode, developed with Sony’s own signal processing technologies, allows users to effortlessly enjoy audio quality that is distinctly Sony. ClearAudio+ mode incorporates a variety of Sony’s technologies, but with one simple operation, users can easily enjoy Sony recommended sound in ultimate clarity and presence, across the entire spectrum of sound.
Also available at launch is a promotion for up to $45 in feature films from Google Play™. The Xperia Tablet S will come equipped with redemption codes to add three movies from a choice of fifteen available movies to the Google Play movie library.

TABLET ACCESSORIES
Users can personalize their Xperia Tablet S with a new line of optimized accessories (sold separately). The Cover with Keyboard features a thin keyboard that connects via the device’s multi-port, so no pairing is needed. The Docking Stand is sleek, stylish and adds functionality with three USB ports and one HDMI port. Other accessories include a Simple Stand, Carrying Cover in seven stylish colors, a Charging Cradle and a Dock Speaker.

AVAILABILITY AND PRICING
The Xperia Tablet S is available in 16 GB, 32 GB and 64 GB versions and will be sold at Sony Stores, including online, and other authorized dealers nationwide for about $399, $499 and $599 respectively starting September 7 (preorders start today).
Accessories (all available at launch with the exception of the Dock Speaker):
Cover with Keyboard – $99.99
Docking Stand – $99.99
Simple Stand – $24.99
Carrying Cover –$50.99 – $79.99
Charging Cradle – $39.99
Dock Speaker – $129.99, available November
For more information please visit www.sony.com/tablet, visit blog.sony.com/xperiatablet for a video first look and follow #SonyTablet on Twitter for the latest tablet news.
[/showhide]