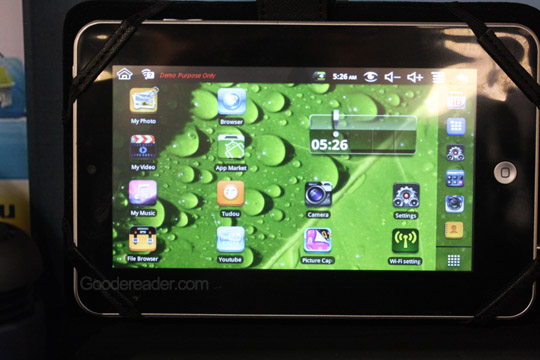 We certainly saw no shortage of tablet computers at CES this year, with over 80 different models in attendance. One of the most interesting booths we came across was Maylong’s, where they were showing off some well crafted, very affordable devices. One particular Tablet PC that caught our eye was the new Maylong M-250 Universe, which was a followup to their widely popular M-150 that was a top seller on Amazon.

The Maylong M-250 Universe featured a 7 inch capacitive full color touch-screen tablet with a resolution of 800×600. It was running Google Android 2.2 and browsed the internet via its WI-FI connection. When you surfed the internet with this device it did so displaying pure Flash, for an unbridled web support. It also featured an SD port to enhance the memory up to 16 GB, stereo speakers, and a headphone jack.

It also had a number of applications installed on the it, such as a dedicated Youtube player and the Aldiko ebook app. We saw a ton of ebooks loaded on the M-250 and found out it can support many different electronic book formats such as ePub, PDF, TXT, RTF and more.

Although this follow up tablet from Maylong does not have access to the Google Android Market, they did offer alternatives Market Downloads such as Appslide. So if you purchase it when it comes out around March of 2011 you can still download your favorite applications via a few different market alternatives. This is great because you can download different media players and have access to a wider array of support video formats.