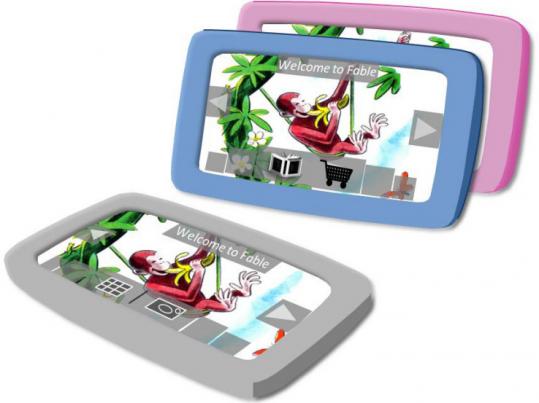 Now kids too can look forward to something that has been made exclusively for them – the Fable tablet from Isabella Products. For the French company, the Fable marks a big jump from the wireless digital photo frame business they have been into so that what they have come out with is the world’s first wireless tablet device designed with kids in mind. And just as cute a name the tablet carries, the device too looks very much part for the course, done up as it is in attractive color and shape.

Isabella Products has come out with the Fable in collaboration with the Boston publishing house Houghton Mifflin Harcourt that boasts of a huge collections of books dedicated to children as well as almost every other type of content that kids like to have. E-Books costs vary from 99 cents to $3.99 at Houghton Mifflin Harcourt though there are four other publishers that have lined up to provide content once the tablet reaches markets, which is likely to happen towards the middle of 2011.

“Isabella Products is excited to bring to market the first children’s tablet aimed at creating a learning experience unrivaled by today’s toys and e-Reader products,” said Matthew I. Growney, Founder and CEO of Isabella Products.

“We believe Fable will safely and securely usher in some of the youngest users to a digital learning environment, and with HMH’s extensive list of award winning children’s titles, we will design a superior digital content experience.”

With a 7 inch touchscreen surface upfront, the Fable runs on a custom made Android platform and boasts of a ‘carousel’ navigation interface that has been specially designed for the tablet and the patent for which is pending. The tablet draws inspiration from the needs aroused out of the founder’s own daughter who is now in kindergarten. And since it has been designed for kids, the Fable has also been sufficiently ruggedised so as to ensure its survival against the torture that it is likely to face from its target audience.

The Fable will also come with a secure connection to Isabella’s own VizitMe.com content management system but will have parental control built into it so as to ensure only just the right content reaches their kids. VizitMe.com also automatically creates a back-up of all content in the cloud which will ensure the little ones never loose their data.

Complete details of the tablet are yet to be made public though what is known is that the Fable will include a mobile broadband connection (for a monthly fee) as well as a 4 megapixel camera. Kids can use the camera to take pictures which can later be used to unleash their artistic skills by coloring the pictures in the pre-loaded drawing app. Kids will also be able to share what they drawn via e-mail though here again parents will have the last say as to with whom their children can communicate.

The Fable is expected to cost around $149 and $179 when it reaches markets.