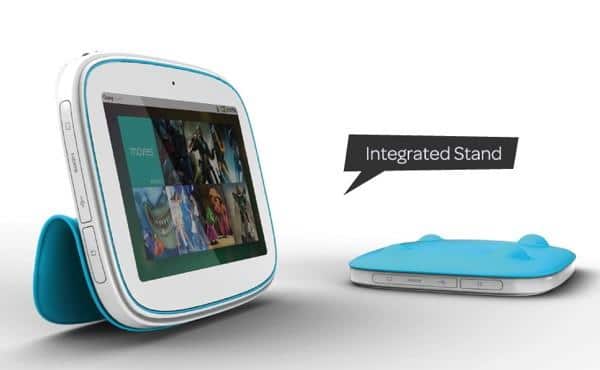 With so much  tablet action going on all around us, there has been very few so far that are targeted specifically for kids. Sure we have the Fisherprice ISL or the V.Tech V-Reader but they need expensive cartridges.  Now we hav ea kids device with an Android experience and kids worldwide can  thank Karuma for having come up with the PlayBase tablet that can let them just be themselves without the elders going crazy around them. What’s more, the PlayBase tablet sports some nice cool specs to show in a kid specific tablet while still sporting a decent price tag.

To begin with, its  a 1.2 GHz single core Rockchip RK2918 Cortex A8 that hums underneath a 7 inch capacitive multi-touch display having a resolution of 800 x 600 pixels. Assisting the CPU will be a 1 GB DDR3 RAM while its a heavily customized version of Android Gingerbread that acts as the operating system. Also with that much of memory at disposal, an upgrade to Android Honeycomb or ICS is definitely in the cards in future.

Karuma is claiming a battery life of around 5 hours while the tablet will connect to the internet via Wi-Fi connection. The tablet also includes a front facing camera while on-board storage amounts to 8 GB. While that should be enough for kids, there also is a microSD card slot that can accommodate another 32 GB. Integrated stereo speakers as well as an accelerometer round off the spec sheet. Further, a silicon cover acts to protect the tablet from the innumerable bumps and shocks the tablet will be subjected to which also saves the screen from scratches and marks. The silicon cover also folds back to act as a kickstand.

All of the above will cost parents £170 or about $270 with the pre-order process kicking off from November 15th while deliveries start from the 1st of December.

“Low cost does not mean having to compromise on quality. The idea of kid-proofing PlayBase came from my personal experience (and many others!), with my 2-year-old nephew who broke my tablet’s screen, after dropping it on the ground,”said Ashley Sayed, Karuma managing director before also adding, “PlayCovers will offer extra grip for little hands and butter fingers and keep it safe from drops, knocks and bumps.”

Designed and engineered in Singapore, PlayBase® is a sleek, durable and tough tablet for adults, built with kids in mind. Weighing in at just 325grams and at a thickness of 9.7mm, you’ll want to slip it into your pocket and take it everywhere you go. It features a 7″ capacitive multi-touch display, formed metal rear covers as well as interfaces for micro USB and a headphone jack, all housed in a sleek, kid-friendly and lightweight design for ultra portability.

Powered by Android,PlayBase® is more than just a well-built, multimedia device. Specifically designed to address the growing demand for kid-friendly tablets, it emphasizes on style and value while providing the latest technology and exceptional features users want, at very attractive price point. “Low cost does not mean having to compromise on quality. The idea of kid-proofing PlayBase® came from my personal experience (and many others!), with my 2-year-old nephew who broke my tablet’s screen, after dropping it on the ground. PlayCovers will offer extra grip for little hands and butter fingers and keep it safe from drops, knocks and bumps”, says Ashley Sayed, Managing Director.

Its sleek, stylish Dura-Body® features 5 main attributes that distinguishes it from other Android devices:

PlayBase® PlayCover®
PlayBase® introduces its innovativePlayCover®, a shock-absorbent silicone cover that wraps around the device and prevents damage from drops* and protect against rain,spills, dirt, scratches and screen marks. When not in use, it serves as a stand to watch videos and browse the internet. This unique slip-resistant rubberized surface is comfortable to the touch and easy to hold. Best of all, it comes with a complete range of PlayBase® accessories to fit your personality and lifestyle!

Each PlayBase® unit comes together with its own PlayCover®.
*PlayCover® increase the drop test performance by up to five times when compared to similar 7″ tablets, meaning your device lasts longer than any other tablet on the market.

Upgradable firmware
With 1GB system RAM, users will be able to upgrade from the current OS to the latest Android releases, through our website, within the next few months.Combined with a powerful 1.2 GHz processor + 3D GPU, it promises to give you a smoother user interface and one of the best 3D gaming experiences ever.

Discover a whole new level in sound quality
When fitted with the PlayCover®, dual speakers deliver stereo audio to give improved bass and enhance your music, movie, video and gaming experience.

PlayBase® games
Pre-installed with our very own play-based learning game, it will be the first in a series of educational games that will challenge children and adults alike with its varying difficulty levels. New games and updates can be downloaded from our website, www.play-base.com. Follow us on Twitter (@Play_Base) for updates.

Pricing & Availability
PlayBase®will be available for pre-orders from 15 November 2011, through www.play-base.com, with units arriving early December, in time for Christmas. PlayBase® will retail at £169 and is available to buy online via www.play-base.com, Amazon and eBay from 1 December 2011.